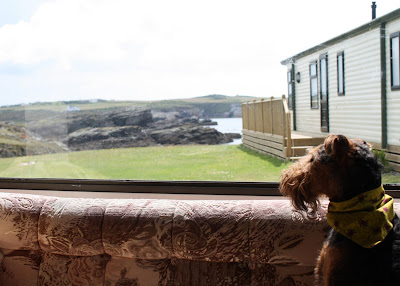 You're all thinking I'm looking at the view, wrong its these things 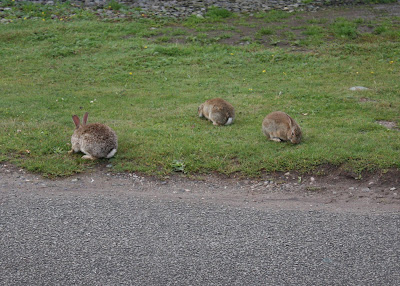 Dam Rabbits they were all over the place, gave me the right run around. Right lets take you for a walk outside. This is the beach that's in front of the tin box, we call it the sugar lump beach you can see why. 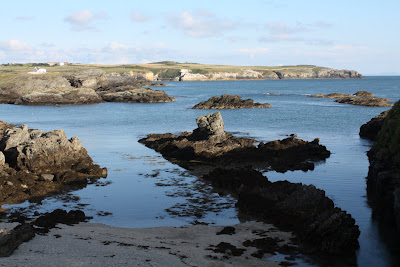 This is what it looks like with the tide out 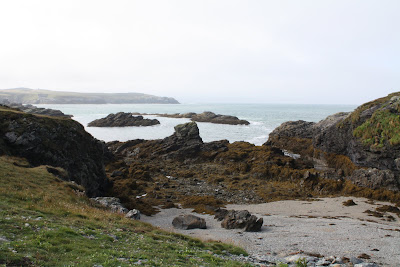 Dad said he would take me down to find a crab! 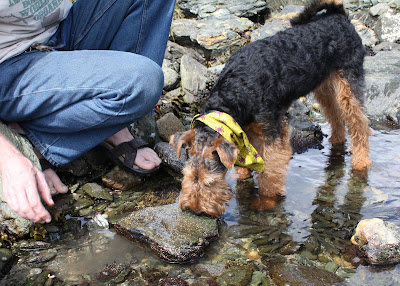 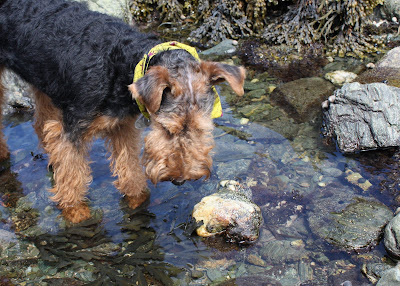 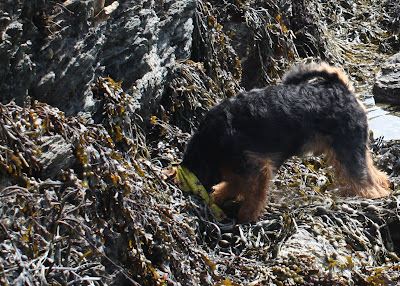 We didn't find any, but I got my seaweed intake for the day 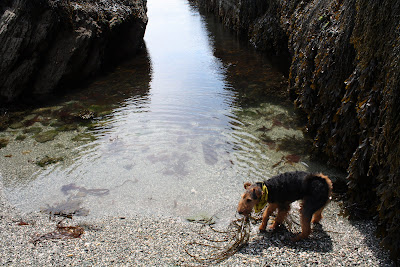 You can go all around the cliffs from here, so lets go, 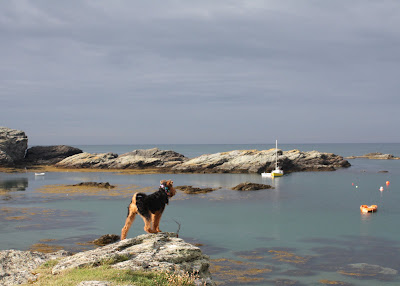 This is the next beach along, but just look what's behind me 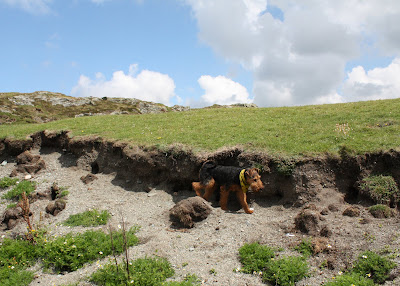 Rabbit Holes all the way along, and some big one's on top! 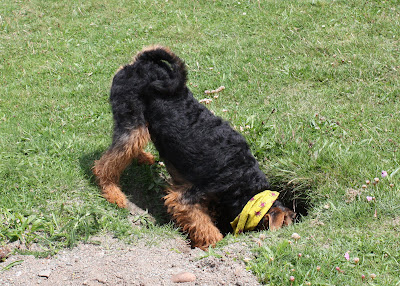 They're not going to show there face's so lets move on, my next favorite thing after steps is rock climbing 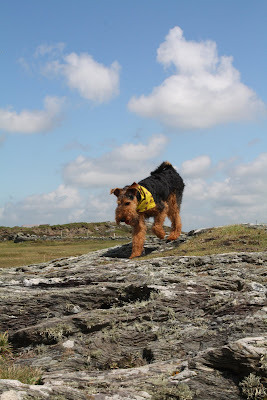 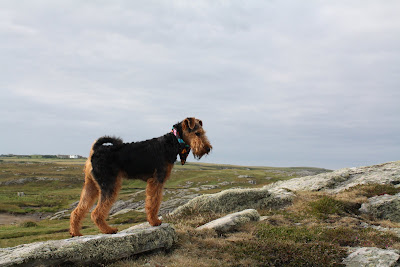 Its that dam rabbit again, he's just a dot on the right hand side, I spotted him straight away. 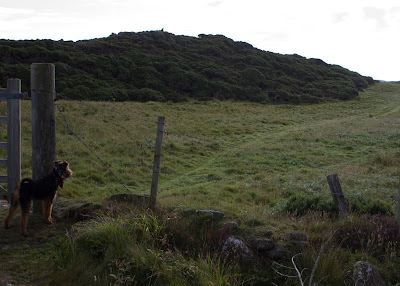 The pic's you have just seen were my morning and afternoon walk, not a bad place to stretch your legs. 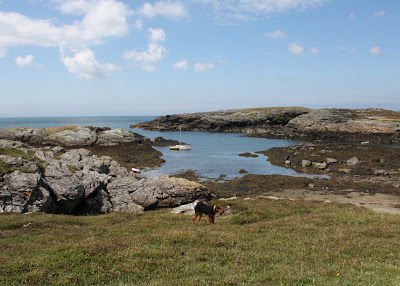 My place outside the tin box, another butt shot 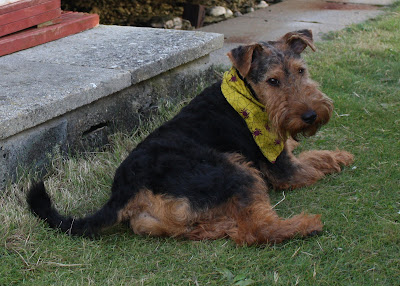 There is a pub on the caravan and camping site over the other side, that does let dogs in, but this sign is outside I don't think I've seen mine steam like that! 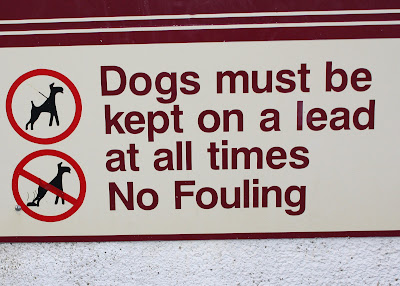 Mom's got a new pic taker, and wanted to have ago at some night shots. silly women went outside with out a torch, I told her to watch out for the "Were Rabbits", she came back a while later and said she could hear them all around her!!
I think that's where me nightmares about rabbits has come from. 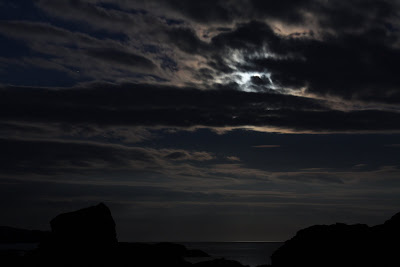 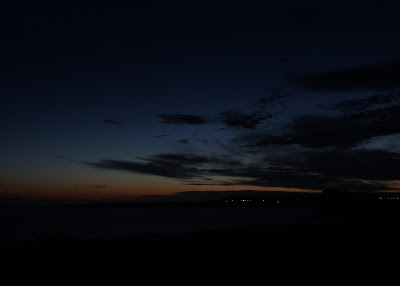 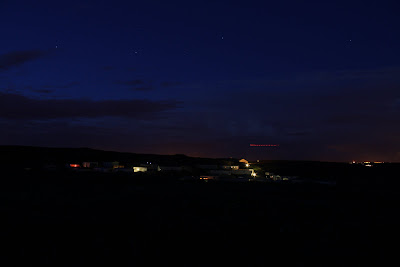 How pretty! I'd love to be able to take Sam and Monty to that beach!

P.S. - they steam on cold mornings - maybe that is prohibited in winter?

I'm glad that you, Mom and Dad had such a good break. Bet those rabbits kept you busy!
Just love Mom's pictures :o)
Auntie Rose x

What gorgeous country for George to explore! Lots to do! Pretty nighttime photos. Funny sign -at least a leashed George is welcome!

Ooh, I love the pictures. Hey, those rabbits have beachfront condos. That's some valuable real estate. Must be very wealthy bunnies.

I think those rabbits liked to tease you, George!

Ha ha, No FOuling, that's soooo English!
Hey, we would love to mongrel-around with you the beach and chase those rabbits. Please, next time you have an encounter, tell'em about us!

oh how beautiful! I don't know about rabbits, but we have coyote's here and I am very afraid of them!

You have a Pawsome Weekend!

Silly wabbits! These are just beautiful pictures, George! Thanks for sharing.

Oh, if I could have come with you, those rabbits wouldn't have bothered you the whole time!

As long as it doesn't steam and they don't throw you out, I wouldn't ask too many questions on that one!

With those rabbits around, I don't think we'd even stop to enjoy the scenery, or seaweed, or beach. Looks like a fantastic place to run around. Maybe one day, we'll get to the beach.

Oh George!! WoW!!! Such cool place to be!! Butt we's saw 'dat bunnie harrassing yous!! We's did!!
Yep..Uh huh.. he's kept following yous around as yous back was turned while yous narrating you blog for us!!

He be tricky!!
What outs for his big rabbit hole!!

Oh yeah! I must visit this beach with many rabbits immediately! This is a paradise to go hunting and rave.
I ask mine mama, when we drive off... Immediately, Immediately!
many lots of love

Happy Sunday George,
Mom and I thank you all very much for the lovely tour in and about your home. Yes indeed that is one fine place for a stroll. Well minus the aggravating rabbits. HA. You have very big wild rabbits in your neck of the woods...they would make excellent burgers.

Mom liked the sign 'no fouling' over here the signs similar to that say 'no dumping'. No fouling is a nice way to put it.
MOL
Madi

What a lovely place to holiday!! Despite those pesky rabbits! Did you chase any??

George, what a beautiful place to live!! Excellent pictures and the scenery is so pretty! All those bunnies just sitting around is cute! Mom loves the picture of the sign...she's always taking pictures of signs too when we go somewhere. Lots of love, Holly and mom

Those bunnies sure have big entrance holes to their houses! They really should have invited you down for tea and biscuits, George!

Hi George, What a beautiful place you have to visit. I can see there are lot's of things to explore. Your one lucky little doggy. Those bunnies are something else. I don't think I've seen so many in one place!

george,
wowsers, you totally were not kidding about all those crazy rabbits everywhere!!
i especially LOVE the picture of you on the rock looking at the little sail boat in the water. that is a most beautimous picture!!
*woof*
the booker man

That is really a lovely vacation spot, George. Stanzie just loves those critter holes. She'd love to stay there all day, with her snoot in one of those bunny houses!

George.....that is a fabulous place you went to for your hols! You are one very lucky guy.

Welll that certainly looks FABULOUS and as for those rabbit kids? We shudder every time we loook at them.... Ohhhhh what a holiday..Love A+A

George, You certainly picked out a most pawsome spot for your vacation! I be very jealous!

Tell your mom that her new piktur taker works wonderful.....we loved seeing all hers pikturs.

Such a beautiful place you got to visit. And how lucky that you can go off leash too - we aren't to be trusted off leash - we love to run too much.

Hi ya George...them piktures are just amzing. Tell you mom thanks fur being your personal foto grapher.
Now, I would haves loved to join have join you in one of them rabbit holes....I mean, furiends are suppose to help one another and watching them rabbits taunt you was just NOT good. Them things are pesky as can be.
Dat dog sign was kinda funny withs da steam coming off and da NO FOULING...hehehehe...never heard it put dat way befores.

George, you'd better be careful with those crabs. Just saw something on Animal Planet where a human ate a raw crab and got horrible worms inside his belly, UGH!

God I love your pictures! It is hard to pick a favorite, but the one of you on the cliff overlooking the water is going on my wall! Shh. Don't tell Indiana.

The photo of your head in the bunny hole is too cute! And the scenery...Absolutely beautiful! Even the bunnies. :)

Beautiful pictures. What a lovely place to stretch your legs.

What a beautiful holiday, George! Thank you for sharing with us.
I enjoyed all the pretty photos, especially the funny one of your head in the seaweed!

Hi just stopping by from the blog hop. What beautiful scenery - what a lucky pup.

Of course you can always find room for a butt shot! Getting any e-mail from the ladies? ;)

Better luck with your rock pooling next time George- I'd love to see you with a big old crab in your mouth. What a treasure that would be! In the meantime, there's those darn old wabbits..... Dylan the Dog