Hello to all of you, first up I would like you to meet my furiends
Inky and Molly
Two Airdales from Australia, they were one of my first followers. But they have been a little quiet lately, not that there anything wrong in that, we all have busy lives, but there back on the ball, and are Celebrating there 100th post +one year bloggin+ 70 followers, and would like to get to meet some new friends.
They have a give away going on to celebrate. So if you don't know then pop in and say hi. 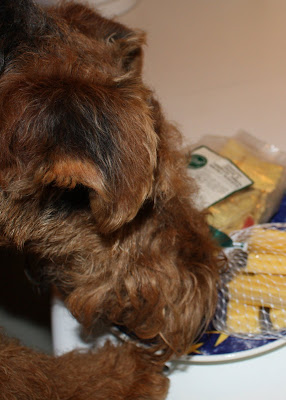 On to Cheesie Tuesday at the Pub, now I have to diplomatic here, cus I have two pubs, yes two that I like going in The Station and The Crown, both real ale pubs, and me and the landlords get on great.
Now Cheesie Tuesday takes place in The Station.
I will be doing a post about The Crown soon, don't won't the landlord to think I've forgot him!
(there are rumors going around that he's is doing
something special for me)
Each Tuesday the regulars take it in turns to bring some different cheeses into the pub, so peeps can try them. this week was Dads turn, mom brought me my own doggie cheese, biscuits and dog beer. 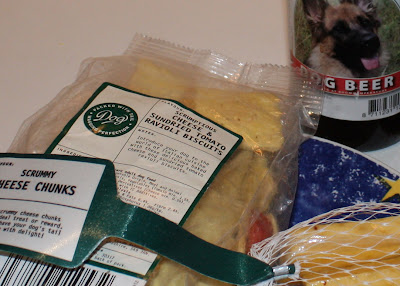 What she don't know is, I have the peeps cheese and Guinness froth anyway. 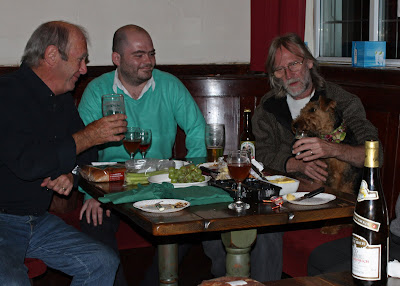 You can see there's not much left on the table. Dad looks like he's got me in a death grip!!
He was just holding me glass for me.
Even time to watch a Domino's match 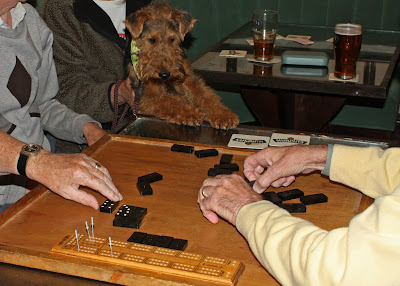 So there you have it, my Tuesdays in the pub.
This weekend I'm doing something I've not done before, in fact two things!! Camping and a Folk Festival. I've been practicing me folk dancing, so I don't show mom and dad up.
I'm getting quite good at it,  as for the camping I'll let you know, my bedrooms coming with me so that's OK, just hope the tents bigger enough!!! 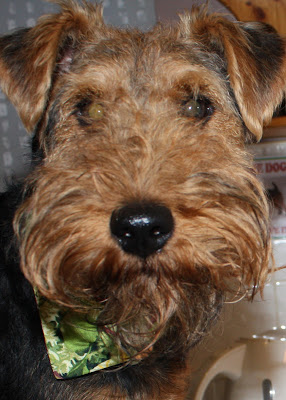 Mr George - we would love to come to the pub with yall!!! You look like your having a good time! We love dog beer too!

Looks like you had a great time at the pub, George. It made me long to be there with ya!.
We'll look forward to tales from the camping and folk festival trip!

Lucky you, George, to be invited into the pub. Dogs are definitely NOT welcome in American pubs! If there is patio seating, sometimes dogs can sit out there, but generally pubs are not dog-friendly.

I love that they let you in the pub. Our pooches have been to the bars out here in Chicago, but only for special events. And Miss M was trying to pick up guys the whole time.

Glad that Cheesie Tuesday went well George - when your Mom showed me your cheese and biscuits it made me feel hungry as they smelt SOoo good!
(Shhh, don't say anything but, I think your Dad has shares in The Crown....he keeps going there to make sure they're selling plenty of ale. It must be for his pension fund LOL!!!)

A day at the pub with Dad with your own beer and cheese?!!! Dog, you are livin the life!

Waggin at ya from across the pond,
Roo

Geowge
What a lucky pup you awe..I wish I lived in a civilized countwy whewe they let doggies into pubs..what a bwilliant idea to have a cheesy tuesday..Think of me next time you go and have a wondewful time at the folk festival and camping.
Those pubs awe lucky to have you as a customew!!!!
I know and love Inky and molly
will go visit them now
smoochie kisses
ASTA

Dude... that's so awesome! I wish I could go to the pub with MY dad! You've got the life pal! Have a brew for me!
-Corbin

The Folk Festival sounds fun and I really like the sound of your Tuesdays in the pub. Have a great day!

George, Your social life is way better than mine. Amazing, you even have someone to hold your glass for you! We would do much better on this side of "the pond" if we had more pubs and less bars. There's a big difference, my friend. Have a good day, George.

I wanna lives where you lives!!!!!! Send me your sky miles pronto...I wanna go gets drun...I mean I wanna goes and haves a drink in a public place dang it! Oh and I want some cheese too.

Down the pub with the boys......that looks like fun! Haven't tried going into one of our pubs, but I think we'd be ejected! Cheese day is a winner, too.

Look forward to your posts about the Festival.

How cool is that?!?!?! Furst, you get to go to da Pub, then you get cheese and da beer foam and then you gets to play dominoes too!!
what a life!

We don't really have Pubs here in Texas....butt we do haves "Beer Joints" or "Ice Houses". Neither one these kind are nearly as civilized or advanced as your Pubs (they don't allows dogs)

George, that sure looks like lots of fun! We both wish we were there!! Lots of love, Holly and mom

How we wish we could get inside a pub! What fun that would be!

Dat is so cool dat you gets to go to da pub with your dad AND eats cheese and drinks BEER! We can't do that over here...can I come lives with you?

PeeS I will go visits your furiends now

George this was a most interesting post! Drinking and dominos in a pub... what a great time!! And I bet you LOVES camping. It's a blast! Send us those videos of you folk dancing when you can!

Tuesdays in the pub look like a blast! So nice of your dad to hold your beer for you...quite the service. As far as the folk festival goes, as a fiddle player myself....I bet all of the days will be enjoyable :)

Dog beer! I didn't know there was such thing!

I love that you can go into the pubs to sample the cheese along with your mum and dad!

I just checked out that blog and read your comment. How nice of you not to help promote it even though you aren't entering the giveaway.

Hey George! That's pretty cool that you get to go to pubs! We have a couple places that allow dogs in their outdoor seating areas, but not inside! Have a beer for me!

P.S.: You were right about that creature being a mink not an otter - I confirmed it today!

LMAO! He sure did look like he had you in a death grip. HOLY COW!! Looked like you weren't going anywhere Mister. LMAO! Thank you for sharing your experience, I haven't stop laughing yet over that one picture!!

We just love how you Uk pups can just wonder on into any ole pub. When you hear the pink people talk, one might think that that alone would be reason enough to settle down over in the land of grey.
BWT, if you think we've been quiet, you had better think again! Nothing like quiet!
Anyway, thanks for taking part in the giveaway. We've already had loads of people coming over from your blog so thanks, Mini!!
Love always,
I & M

George lad, remember the words of Sir Thomas Beecham...'Try everything once except folk dancing and incest'. Good advice for dogs as well as humans, I suspect!
Toodle pip!
Bertie.
PS That pub looks awesome!

Way to go George! Have a great weekend.

George old man, you are a bright and beautiful lad indeed!!! YOU LOVE A GOOD BREWSKY as we say out here in the states.....we used to love to go to a lovely little pub in Marblehead Massachusetts named, THE KINGS ROOK and one could play chess there as well. ENJOY EVERY MINUTE SON!!! Anita and Balzac

GREAT Post George!!! We are heading over to say how to the new kids on the block.

George how cute you and Dad have a man's night.

Enjoy your weekend and we'll be check the webcam..I hope to see you dancing too.

You are so lucky you can go into the pub - we have to sit out on the the patio with our boys!

george,
i would so love to come to the pub with you for cheesie tuesdays! what kind of cheeses did you get to sample??
miss inky and miss molly are grrreat friendz, aren't they? they were some of my first friendz, too. :)
*woof*
the booker man

Oh George!! We's Jello's all 'da funs yous having!! Our Daddy loves 'da Guinness's stuffs yous Daddy be drinkin' too!! And My Mommy loves 'da Cheeses!! Okays.. so we's off to check out yous furiend and see if yous site is up too!!!!