Over here in the UK its a Bank Holiday Monday, it seams its a time when peeps do all sorts of activates, Mom and Dad are a bit kooky, and like to do things out of the norm, which keeps me on me pads, anyway they had bought me a ticket for a Duck Race, I was surprised, a dog race yes, but ducks! turned out its not the ones you see in the parks that you chase, these are yellow plastic ones with numbers on, and my number is 376, the prize is £100 for the first one over the line. so was keeping me paws crossed I'd win. 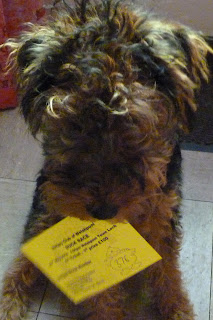 This is all going on in a place called Welshpool, so off again in the car. Mom and Dad had to pay to get in this big field and the peep that took are money took one look at me and said there is a dog show over in the top corner. Lets face it  I wasn't having a good hair day, to late Dad was marching me over to where the other dogs were. 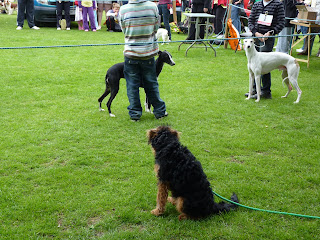 I'm not happy about this, as dad goes over to sign me in, what do I have to do, none of the other dogs would talk to me. I was the only WT there, he came back seams we have missed most of it so I had been entered into "The Dog the Judge would like to take home" ,hey could be in with a chance 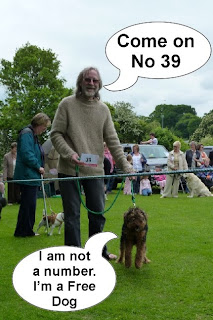 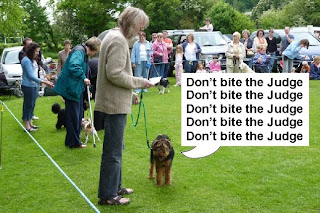 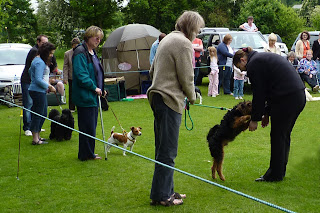 Just couldn't help me self 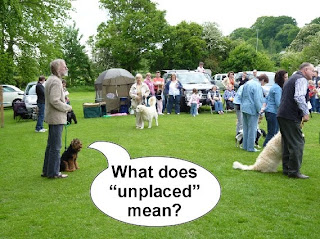 Yes I'd blown it, don't care wouldn't want to go home with her anyhow.
Then a quick walk across the field to the canal. 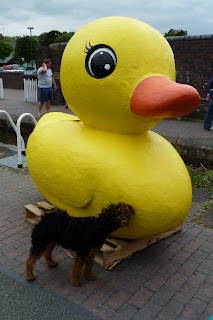 Blimmy are they this big? maybe I could sit on one for a ride, A peeps was saying they had sold over 700.
700 going down the canal this could take a long time!
Turned out they are only tiny, in they go 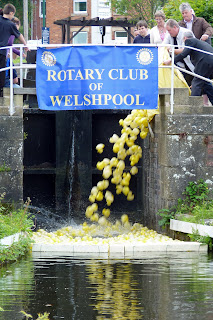 With me paws crossed that I'd win 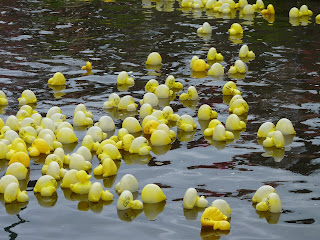 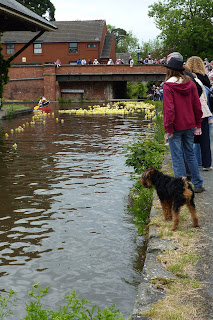 George,
Did you at least get to keep your duck? I think you look great. Don't let that silly judge ruin your day. If you lived here in America, then I'd like playing with you.
Sally Ann

Sally Ann no I didn't get my duck it gets packed away with the others! but mom got me a treat from the dog shop to make up for it.

Geowge
Stoopid judge..and stoopid doggies who didn't want to talk to you. Cleawly, you wewe the BESTEST thewe and who wouldn't want to go home wif you(I cewtainly would!) and you didn't even get to keep the duck??
What a gip. sheeesh....not faiw at all.

GEORGE!!!!!!!!!! Yoo HOO!! It's Agatha and ARchie( really just call us A+A) Thanks for stopping over. PL1 and 2 ( pack leader) had a welshie before us. In fact we were supposed to be one welshie and one wft but that's another story!!! Listen if we were judging you would have won habds down..in everything..Love A+A