This post is part of Maxmoms "Unity in Diversity" please take a look, its not all about football there recipes, photo's and write ups on other blogs about the countys that are playing.
England are playing Slovenia,  its a big one, if they lose they're out.
Last time it was the counties, and now I will tell you a little bit about my home county. 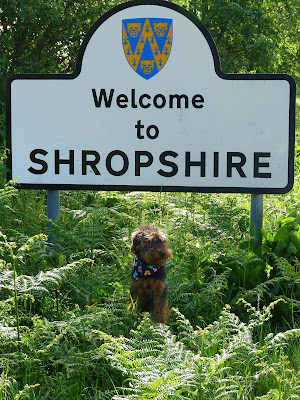 I was born and breed here in a place called "The Clee Hills" not far from where this piccy was taken. Mom and dad didn't think they would be able to pick me up because it had been snowing on and off of a couple of weeks. 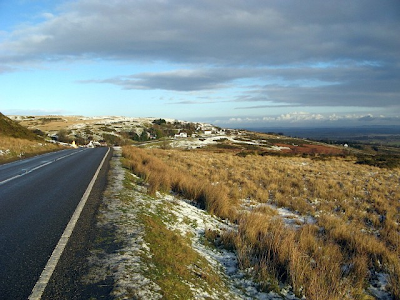 This is a map of the county and how it is broken up into boroughs, South Shropshire is where the Clee Hills are. 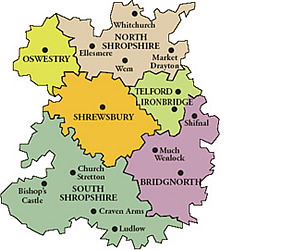 Mom was born in Bridgnorth, what's left of the Castle tower leans at an angle of 15 degrees, that's greater than the leaning tower of Pisa. 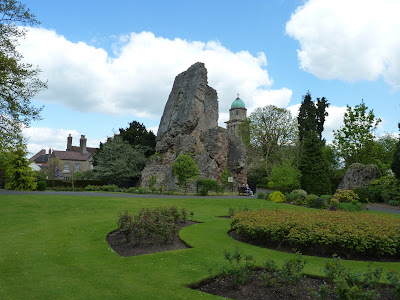 Not far and in the same borough is Much Wenlock. 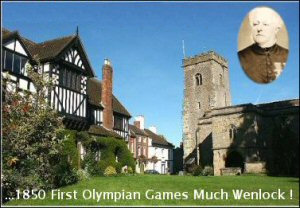 the following quote was taken from here

"It was in 1850 that the first ever Olympian Games were held here in Much Wenlock. The brainchild of Dr Brookes, the Games were originaly designed "to promote the moral, physical and intellectual improvement of the inhabitants of the Town and neighbourhood of Wenlock".
Shrewsbury is the County town 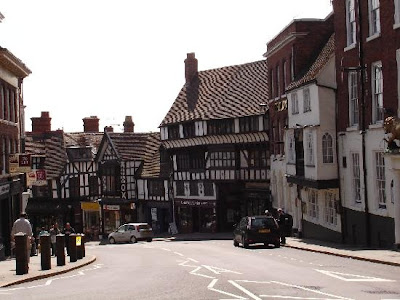 It has over 600 listed building. Charles Darwin was born and educated here. Shrewsbury Flower Show is the longest running horticultural show in the world, and has just got into the Guinness Book of Records. 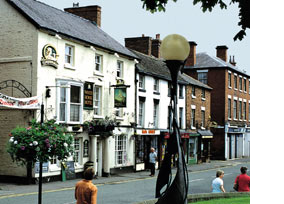 The Sweet Pea was first grown here by Henry Eckford in the 18th century, and is still celebrated each year with the Wem Sweet Pea Festival. 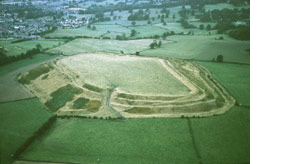 Wilfred Owen was born in Oswestry, he is referred to as "The Greatest World War One poet".

Update England won I think it is Sunday when they next play.
Right I'm off down the pub.
Posted by George The Lad at Wednesday, June 23, 2010

GeorgieBoy, All this geography talk is very confusing to us. Let's see if we got this right. Charles Darwin was born as a SweetPea in the same pod as your mama and is celebrated every year along with WWI in Clees Hills?? Is that right? Hmmmm.
Smooches,
BabyRD and Hootie

ps-I love your photos-x-Cassie the human

I hope england wins tommorrow. I will keep my paws crossed!

George. You are a smart pup. And articulate, too. We're gonna learn a lot from you if we keep hanging out with ya. That's a good thing.

Heading to google The Clee Hills. You've got our interest up.

(Good luck in the games)

Thanks George, this was very interesting! I think I might like to put something together like this - though I have lived my whole life in Chicago (with a few trips to the north woods in Wisconsin). Not quite as exciting as your life and country!

I will keep my paws crossed for England tomorrow.

What an incredible post! You live in an exquisite part of the world...I love all those medieval buildings. As for the sweet peas...I have some growing in my garden - to flower in Spring - now they will remind me of George the Lad in Shropshire!
Sending lotsaluv to you and good luck to your team.
MAXMOM IN SA

Hi Georgie,
You live in a very interesting area! There I would also sniff sometimes with pleasure.
Many thanks for your report on your native country.
Lots of love
Mischka

hiyas, george!
thanks for the tour! i enjoyed reading about where you live. you sure have some nice countryside to run around in. :)
congrats to england on their win and move into the round of 16! ya'll do play again on sunday. :)
*woof*
the booker man

Geowge!
What a bootiful plae you wewe bowned in and live in and youw mommi must be welated to queen Guinevewe fow shoowe!!1
I wish I could come visit and play wif you in such magnificent sowwoundings!!!!

Oooh, Geowge
I fowgot to say that my Mommi calls me sweetpea sometimes..
I love it
smoochie kisses
ASTa

We did it we did it...England won! There were a lot of pawscrossed int this house!

We love the piccie of you sitting uder the Shropshire sign! You live in a lovely area.

Congratulations to England!
You sure were born in a beautiful spot, George. The pictures are just lovely!