Mom's been slacking +Days out With Dad 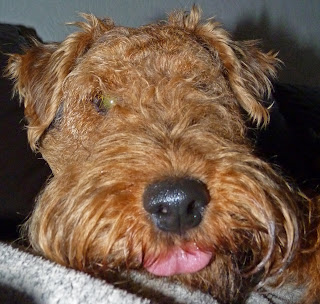 Mom's been slacking!!! just what can a dog do, when the pootie's out of reach, I need to see what you have been up to, its the usual thing to tired, well she might be but I'm not! and I want to tell yea what me and dad have been up to.  Finely two days to late, I'm here reporting in.
Thanks Mom!!
Dads had a couple of days off work, and in time honored tradition,
he wants to educate me. (fat chance of that). 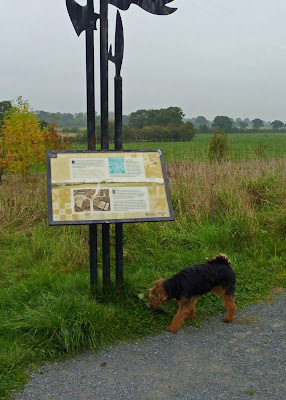 Day One, and we go to the site of “The Battle of Shrewsbury”. I don't know what he was expecting but there's not much there, just a field and a church.
The Battle of Shrewsbury was a battle fought on 21 July 1403, and was waged between an army led by the Lancastrian King, Henry IV, and a rebel army led by Henry "Hotspur" Percy from Northumberland. (The king won 2-1 after extra time and the good people of Shrewsbury provided the pitch.)
There is a pathway which leads to the church so we have a nice walk. 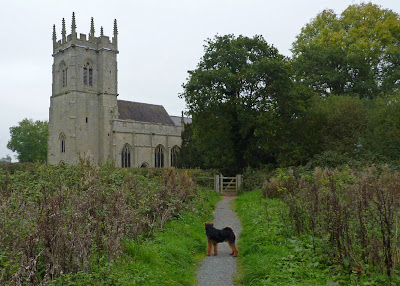 Day two, and I think me Dads goin' a bit loopy. He's wandering round the house whistling the tune from Captain Pugwash and muttering about me being a “salty sea dog” - just plain nuts if you ask me LOL.. Anyways, it turns out we're goin' to see me Uncle Mel and he lives on a canal boat. 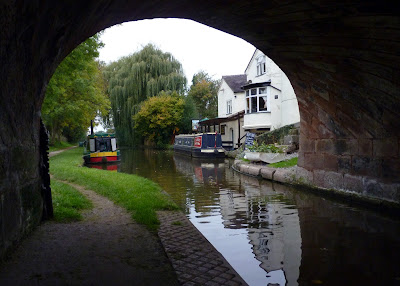 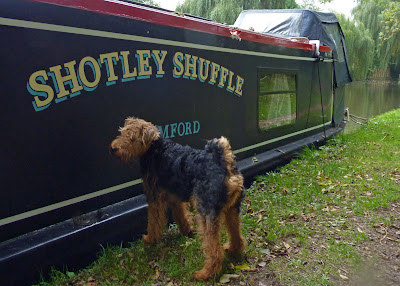 We have a chat about matters nautical 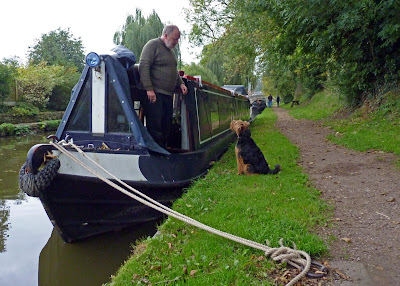 Then me and Dad are off for a walk. 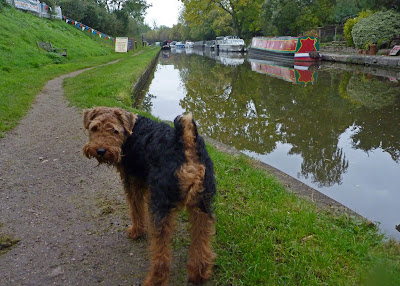 Now, you know when you've been for a walk and you say “we've been miles” - well in this case we did go miles (2 in fact) and can prove it. Take a look at these signposts and you'll see a 1 mile difference!! 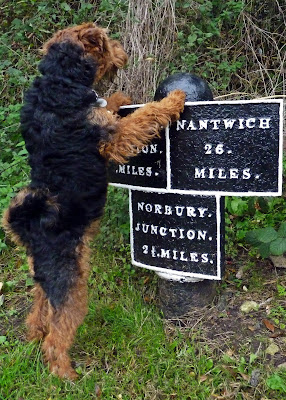 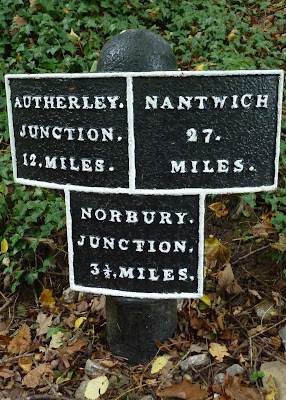 So, there and back makes 2 miles (not a bad bit of maths that – I can count to 5 by including me tail. Dad forgot to include me in the photo!!! )
While on the subject of walks, Mum's just given Dad a book called “Short walks from Shropshire pubs” because he's non keen on this dog walking lark, but likes the pub, its a win win situation. 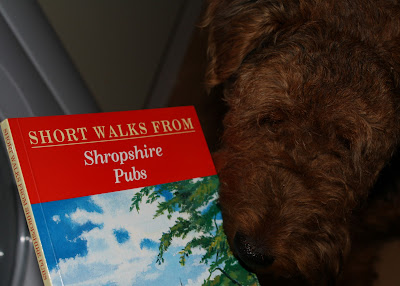 There are 20 walks in the book, I'm sure I  heard him say we would do all of them, so watch this space!! 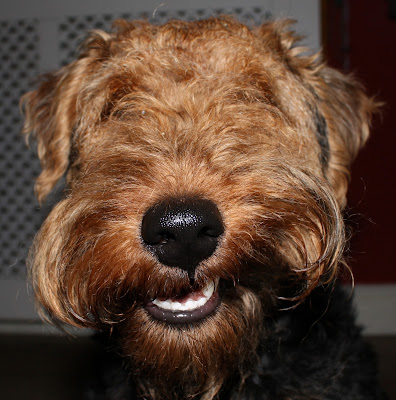 SHE always wanted to rent a barge and lazily float down a river. It's on her list. That tow path looks like a great place to run--bet there was an abundance of smells there.

Looking forward to the twenty walks. Now you make sure he does each one of them....several times!

Hey George, that book looks the best! Absolutely!
Toodle pip! Bertie (who is STILL awaiting his first pub visit...but at least has been on plenty of walks)

How fun to learn about those old battles and see the old stone churches. Too bad you didn't get to ride on the canalboat. Smart Mom you have there, that's one good way to get the Dad walking:)

You had a great time with your dad, George! Did you get to go aboard the canal boat?

That book must have been written for you! I hope you and your dad have fun hoofing it to all the pubs!

George, it looks like you just might have learned a thing or two. Lovely book, I must say. Wishing I could take a walk to the pub!

Oh George mi man, you need to go NOW to the groomers; we want to see yer eyes and such....and you don't want to miss out on all that lovely scenery! Oh George son, I just adore you! BALZAC

How funny that your mom got your dad a book of walking routes to pubs just to get him motivated to walk! But what happens if he stops for a drink at each pub while on these pub tours? What is he is too tipsy to walk? Will you bark for help? I think you will know exactly what to do if the need arises!

George are you gonna see MY Miss Buzz Off??? Will your groomer do the finger plucking thingy? I just love that stuff. It makes me allllllll sleepy and relaxed. Miss Buzz Off thinks that is really funny.
I like that canal boat.

George, that looks like so much fun! We love the pictures very much! Lots of love, Holly and mom

George!! We've missed you! It looks like you've had a fantastical time with your dad. It's good of you to take him out and teach him stuffs.

Hi George!
If I'd known you were visiting a battlefield you could have borrowed my metal detector....you never know, if Dad found some metal in the ground there might have been a bone or two while he's digging it out!
Make sure that Dad does those walks and only has a 'half' - or they may end up being a stagger LOL.
Love
Auntie Rose xx

Thanks for taking us along on your walk. That was most educational; I love seeing how our other dog friends live.

Mom just loves the canal boats, she has seen lots of documentaries and done allot of reading about them.

Sure are happy that you got to ride on the canal boat!

Wow you live in a really cool place!

We can't wait until your mom person can post for you more. I hate it when people stuff gets in the way of the blogging!

Pretty good walk George. Thanks for the history lesson, you are super smart! (and you do math too, very impressive) Can't wait to follow along on the 20 walks in the book.

Looks like another great adventure!
I am so impressed that you can count too!!

You live in a really beautiful country, George. I love that church, it looks kind of like a castle!

Smart move on your mom's part to give your dad that book. I truly hope you really do take all 20 walks. Don't forget the camera!

George. You and your Uncle Mel look deep into conversation. Pretty intense looking, if you ask me. Were you telling him about the Barn Party? The one I am too late to go to? (And you think YOUR Mom's been delinquent!)

Well, like I told Patrice, i'm a good sport. And it's great to see you out and about. You see. I can see. Even if you can't. (You are a very handsome chap however bushy your eyebrows are!)

We'll be back ... we've got some serious catching up to do. But we've gotten started. And we added Patrice to our sidebar ... so eventually we'll get to see what we missed.

Yours
Fergi (and Jake, too. He's sleeping while Moma reads and writes. I'm dreaming of you.)

But Shrewsbury is south of York - how khan it be where woo are too?

Thanks fur the lessons!

We just love the English scenery ( and D says the English pubs are pretty good too). Thanks for the awesome history lesson George.
Noah x

Glad to see you back! You are such a knowledgeable dog!!!

Another great adventure with Dad! Your Uncle sure has a neat house! Never seen a canal house before. Does it go places?

George as the saying goes...'you need to make hay while the sun shines'. We know winter is on the horizon and lots of rain so we're glad you and Dad had a good outing.
Hugs and happy weekend,
Madi

George looks like u had terrific time with your Dad!

Have a great weekend. Good luck at the groomers.

Hey George, the way you were standing next to the sign, I thought you were going to do the Shotley Shuffle with it !!

Hey George, we can hardly wait to see pictures and hear the tales from those 20 walks-what a thoughtful gift!
And we'll look forward to Tuesday's post-groomers picture.

P.S. We here in the states enjoyed that bit of historical information on the Battle of Shrewsbury:-)

george,
looks like you had some funsies with your daddy while he was off from work...even if he was tryin' to be all educational and stuffs!
i think it's super cool that your uncle mel lives on a boat! where all does he go?
i'm lookin' forward to seein' you and your daddy go on the 20 walkies from his new book! do you get to stop at the pub for cider before or after? TEEHEE.

pee s -- the pics with your eyes covered up with your nose furs crack me up!! oh, and btw, your toothies are so white 'n sparkly! what's your secret??