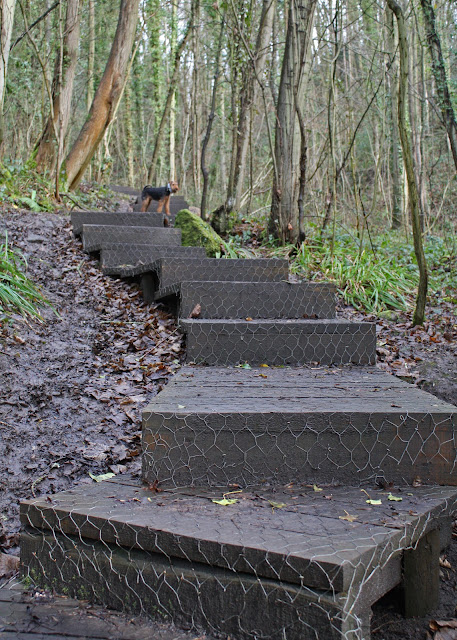 Now you must of heard the film Honey I shrunk the Kids!
well I'm not that small its a bit of an optickal a illusion. Yer I've put tick in bold that's what mom thought I had on me this week (silly woman), I seam to have got a new nick name pox chops!! The Cheek of it.
I'll tell you in a mintue.
This photo was taken last Saturday, one of many flights of steps we went up on our walk, I won't give the game away by telling you where it is, I will be putting the post up tomorrow.
Well what happened is, on Tuesday mom notcied a very small lump on my neck! she looked at it and went yuk I think it might be a tick, at which point she got a torch to have alook, I have to say I was quite happy to stand there and let her get the little bleeder off me.
Turns out it was dried blood. I don't remember on my walks runing into anything or crying out.
So we left it for a day, mom said it just might be better tomorrow. Yea right when she was in the kicthen I just had to scatch it, not the best thing to do, I looked like a vampire had got me, so she said.
Next thing down the vets!!! to get it checked out. The good thing is what ever caused it is not there now.
We left with some cream that mom has to wear gloves to put it on!!! Heck is must be strong stuff.
But it has dried up and looks better, so she tells me. 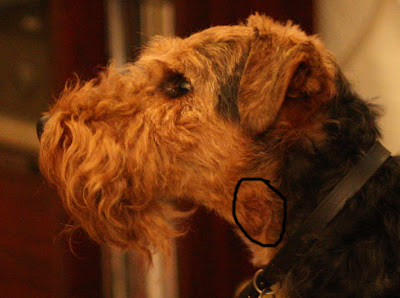 So mom I think you can quit calling me pox chops 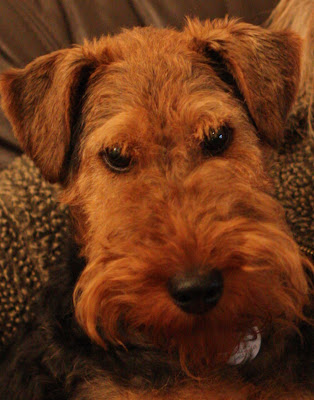 Those steps are quite interesting, George - it looks like they are covered with wire.

And that pox mark - very strange - do you think you might have been bitten by a spider? Glad it is all fine now.

Have a great weekend.

George,
You watch out for vampires...Stanzie, wouldn't like you so much if you were a vampire-dog!

Well, at least you are getting better dear George. My four dogs have the run of our farm and are always coming home with small bites and such.

Love the pictures!
Have a nice weekend!

We have an award to give to you. Can you come and collect it?

Hmm. Gotta be more careful when chasing squirrels and bunnies, George. It's that adrenaline.

aww George! Be careful out there now... Glad you are ok.. Those are some very interesting steps.. Watch you don't catch a toenail.
Enjoy your weekend.. My best to mom and dad.
Penny

GEOOOOOORRRRGGGGEEEE... I can NOT believe that you got by with giving your mom... THAT look.
We call it the "Stink Eye" on this side of the Pond... and I ALWAYS get in trouble when I give Mom the ..STink Eye. Don't you???

ticks are totally EWWWWWWWW! i'm so glad it wasn't a tick on your neck! i hope your ouchie gets all healed up asap! oh, and i totally agree that your mama should stop callin' you pox chops cuz i sure wouldn't want to be gettin' the hairy eyeball look that you are givin' her in that pic! BOL!
btw, what's coverin' those steps? it looks like mesh or somethingie like that.

Ohh, ticks are so scary. We weren't able to go to the woods all winter with the rain and snow, but aren't going to be able to go this spring, either, because Marge will come out infested with them. Her preventative is supposed to keep them from latching on, but they still give me the creepy crawlies in a huge way.

LOVE those big steps. Must be a really cool place you went to - can't wait to hear about it :)

Pox Chops! Some nicknames just shouldn't be allowed. Did you get bitten by an Alien bug when you went on the shuttle?

Those steps are impressive.

So glad you got rid of the nasty. I hope you didn't get your claws caught in that netting. Looks more dangerous than slippery steps if you ask me. xx

Tee hee. Pox chops!
Oh, Gail is telling me not to laugh, as Hamish was always picking up ticks (despite being treated with Frontline) and my turn will surely come....
Toodle pip!
Bertie.
PS How do you find walking on those steps covered with chicken wire George? I don't find it at all comfortable.

Your mum did well to spot it and get it sorted for you so fast. Glad the nasty little critter's gone now.

Have a lovely weekend, love from Winnie

GEORGIE MI MAN!!! ARE YOU O.K.? DID THEY GET RID OF THAT BLEEDER????teeeheee...oh my, you canines, you keep us on our toes. Balzac was always getting into something and scaring the pants off of me. A friend of ours who had a dachund, FROTTO was his name, ate I don't know HOW MANY TENNIS BALLS! He had many an operation to take the bloody things out! NOW mi man, the post man has NOT been by; I am a little worried! I will let you know however, when he does come by. I am sure we will be tickled pink to have a little parcel coming all the way from SHROPSHIRE! Now off to see the previous post that I think I missed! LOVE TO YOU BOTH, Anita and BALZAC

Those steps are really special! Another beautiful place for your walkie!
So glad that the spot is okay now and I hope it heals up as soon as possible!

I literally saw you two pop in! I had to come back only to again say how much joy you both give me. George has to be the most expressive dog I have ever seen. LOVE TO YOU, Anita

Another great installment of Saturday Steps! Those are really neat looking!

Are ticks a rare thing for you, George? We have bazillions of them just the second the weather warms up. It's really quite awful!

My poor friend, George. You must watch those vampires! You must also watch ticks. We have LOTS of them in our area and they can really make you sick. Be careful, dear!

Hiya, George. I'm really glad I've joined the Blog Hop this Saturday and found your blog. I like you, your photos and your story-telling.

And you have the same name as my little whippet boy, George who helps me write my blog. :)

hm, I wonder what you did?
Those look like some big steps!

Are dem steps dangerous ? mee wondered cos ov dem being all caged up.
Mee is sorry yoo had a vampire bite dat is most bogus indeed. Hoe it do clear ups very soon fur yoo my furiend.
Da Moms says Fank Yoo to yor Moms for her card & what was in it. Yoo is verry kind and wee appreciates it verry verry much indeed.

Hee hee! At least it wasn't really a tick! I'd sleep with some garlic around my neck if I were you, just to be sure!

As long as there aren't two little marks close together on your neck and your sleeping habits haven't changed, you should be home free!

On a saner note, glad it wasn't a tick and you are getting better!

Following from the blog hop and enjoying your posts. I really like your digital photo album. I was amazed at the number of simply stunning images. You have a wonderful eye. I would love to follow that blog as well. Will you be making that an option?

oooh George, that looks painful! Glad you got da Vet to check it out!

Can't wait to see the story bout these steps.....they are all covered with wires?!?!?!? Is that cuz they are splippery???

We hope your mom is not like ours, George. When she finds one lump, for the next 5 days she's looking for more and we don't get any peace until she's satisfied!
Those are some serious steps!

That is a GREAT mind-meld stare. Your mom is sure to do anything you tell her when you stare like that. Glad the owie is healing!
Alanis & Miro

Hmmmmmmm......Are you really, really sure it wasn't a vampire? If you start growin' bat wings...watch out everyones!

Hey George!
Wow, those are really weird steps! Covered with chicken wire? Neat pix.
Wow, I'm glad that your neck is okay now. Wonder what happened?!? It's a medical-mystery. Hey, tell Mom...sticks and stones! Pox chops is kinda funny, but you obviously weren't amused. I'm sure she could tell that.
Grr and Woof,
Sarge, COP

Hey George, Hope your sore heals fast!! Mum wants to say she is not clever enough with the photoshopping to make my lead disappear - but she is happy with your info sharing! Tail Wuggles, Rubie.

George, we love those steps! We are glad your mum took you to the vet whatever it was. We HATE ticks with a passion! They are so dangerous and come out here by the hundreds in the spring and all summer. We are glad you are better! Lots of love, Holly and mom

You just look so far away on those stairs! Cute photo!