Now you all want to know where I went on holiday, it’s a place in Wales called Anglesey; it’s a big island off the North Wales coast, we stopped in a place called Trearddur, Thanks to auntie lilian for letting us have the tin box on wheels, Mom and dad have been going there for years,
so pretty much know their way around.
The first three days I thought going on holiday meant each time you went out you got your fuzz wet!
The rain at one point was coming down side ways.
So you will see from the pic’s there's not much blue sky 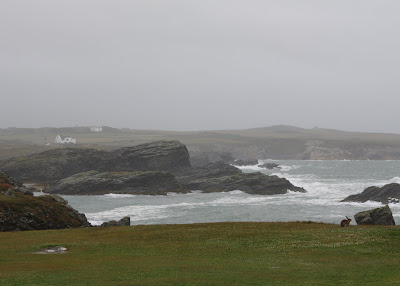 This is the view from the tin box, and look at the dam rabbit, I tell yea it kept cropping up all over the place!
I'll give you a tour around the box when the sun comes out.
The first trip out was to Penrhos Country Park.
Mom didn't want to get her pic taker wet so there's not that many
My first look at the sea 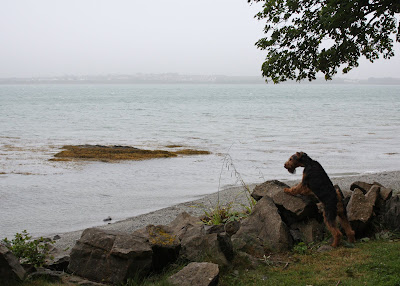 Down on the Beech 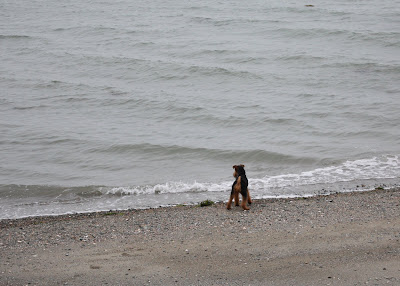 I found the waves funny things, kept getting my timing wrong and me paws got wet 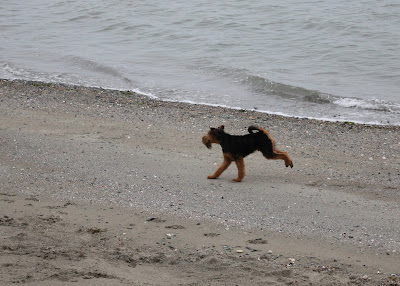 At least I got to have a run round, and found out I loved eating sea weed much the moms disgust she thinks my salt intake would get to high. 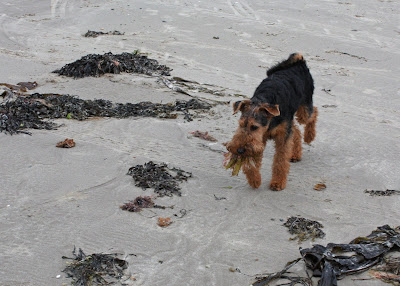 The weather turned bad, turned bad it won't any good to being with, so we went into the woods. 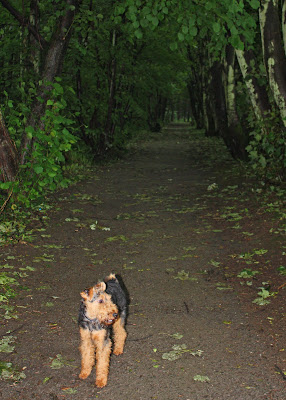 Jeepers Creeper it was dark in there, the dam rain was coming though the tree's, it seamed like it was coming down in cup fulls
We came across a pets grave yard 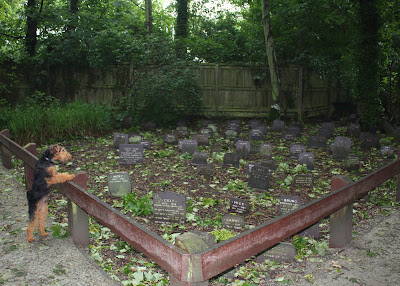 So sad all those much loved pets had all gone to the bridge, I paid my respects by saying a little prayer.
After that it was back to the box, and I decided that it was best to sleep though all this rain. 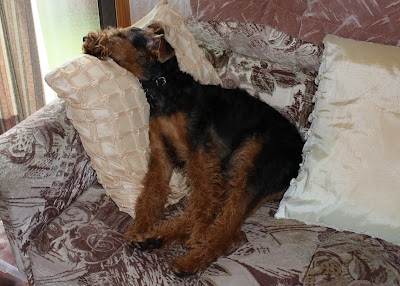 Oh George,
I think you and Andy would be good friends. Did you get to pratice speaking Welsh in Wales? I can only pratice when I go to Atlanta Terrier Club meetings, but all my Welsh friends are and were born in America;so, they speak Welsh with an American accent.
Sally Ann

I love the picture of you near the sea! I'm so happy you got to see it! And the pet graveyard is very cool!

Hi George! You got to go on howlidays? That's so cool and the place you went to seems so mysterious and fun. I mean, a pet cemetery?? I love how you paid respect, you are a very respectful terrier (some might be digging at a cemetery you know?).

I also saw you had so much fun with all the Welshie friends, and you did folk dance!!!! You're awesome!

George, it looks so very beautiful!! The pictures are great! The pet cemetery was special and it is so sweet and respectful of you to stop and honor them. Lots of love, Debbie and Holly

What a beautiful vacation spot! I particularly love the picture of you wistfully looking out to sea.

Oh my what a beautiful country. I know that you complained about the rain but I sure would love that cool rain and clouds now where I am in the US!

You is a very respectiful Welsh Terrier sweet boy!

We've never been out there, so it was so nice to see what it's like from your pictures. I like how you try to keep your back feet dry.

Rain or not I thinks it is a really cool place, I has never been to the sea befores. It was real nice of you to stop and pay your respects to all those pets in the cemetery too.

What wonderful photos!! It looks like you had a fantastical time despite the rain!

george,
i think that trearddur place is way pretty, even in the rain! i can't even imagine how beautimous it will look in the sunshinies!!
about that seaweed -- shouldn't your mama be happy cuz you are eatin' your veggies?? HEEHEE.
*woof*
the booker man

It's way interesting to me, who has never been there. The woods, too. They look like fairy tale forestland. And you were so nice at the pet cemetary, paying your respects like that. Can't wait for the next installment.

Looks like you've got a comfy spot there!
Hey, I couldn't think of anything better than getting my paws wet. I LOVE IT!
INKY

George you are just adorable! Thank you for sharing part of your trip with us. I loved all of the pictures. You seem like a very smart little pooch ♥

Despite the rain, it looks like a lovely spot.
That was nice of you to say a prayer at the pet cemetery. Can't wait for installment #2 of the vacation!

hi george (love your name btw)~! you may be a soggie doggie--but what an adventure~! it was well worth it darling~!! :)

I try to wear my raincoat when I have to go out in the rain. I'm not fond of getting wet! I wish I could help you chase that rabbit, though!

we're taking Eva to the beach on Sunday and can't wait to see how she does!! Looks like you had tons of fun there!

Did you play with the bunny?

Looks like you're kicking your heels in the one picture.

Sorry it was so rainy but it looks like it was worth it to get to see such a pretty place.

What a gorgeous place to be able to run around free like that. And how nice of you to pay your respect to your fellow canines and felines who have departed before us.

Thanks for sharing. Hope you stop by our blog soon!

Oh George, Wales looks so beautiful! I really hope to see the ocean some day. Mama says I would love it! I can't wait to see more pictures from your trip!

Hello Georgie, mummy finds the pictures very interesting. She would like to take there also sometimes vacation.
I would be only in the water.
Lots of love
Mischka