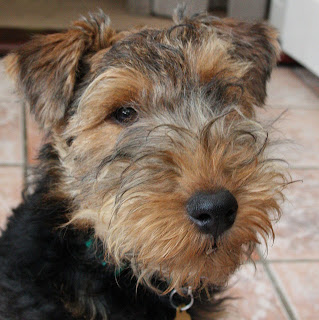 Hi We're back, with a special addition, we thought its only right as you are our regular readers and friends that we should tell you why the unexpected blogging break.
First up both mom and dad say they have more grey hairs than they did the week before.
**************
Its all started last Monday afternoon, mom got in from work at 4.00 dad was on the computer, George was just moping about, me well I had picked up some sweets that dad had dropped out of his back pocket, I had just finished when mom spotted the wrapper, she said to dad "Look she's got your tablets how many was in there" I think I had two, next thing I knew me and George were in the car, great I thought somewhere nice for a walk. We ended up at the vets!!! we both got weighed, locked up, needles in our arms all night, poked and prodded, it was not a good night,
Mom was there to pick us up in the morning with more sweets to take (Tablets), I had bad gut ache and wind, George wasn't to happy with me as he had to go through it all and he hadn't taken any.
So we weren't up to blogging, but we are ok now. 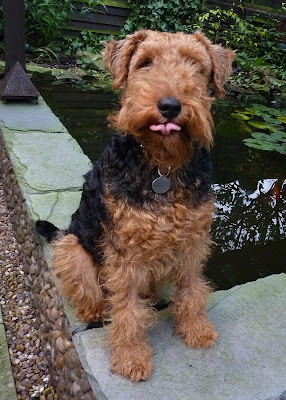 George is sporting the new poodle cut.
"Don't pull your tongue out George its rude" 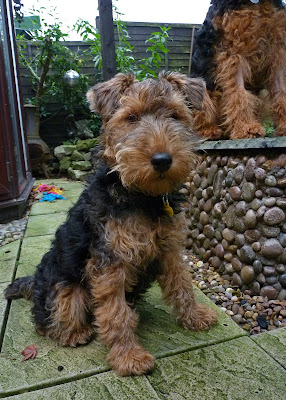 I got away with just one bare patch.
Mom wanted to say a few words
Looking back I can now write a light hearted account of what happened, but a the time it was very worrying for both of us, Howard's not been in the best of health, and is on anti-inflammatories, he'd cut three from the blister pack to take into work having taken one that left the balance of two in the blister pack in his back pocket, some how they had fallen out in the house, and of course at the time we didn't know if it was Tess or George that had taken the two tablets that where missing.
I just found Tess on the floor with the empty blister pack chewing on it. They both had to stay over night at the vets on fluids and the drugs to help flush the tablets through. The one thing that came as a real shock, we were told by the vet that it was a possibility that one or both might get renal failure over the next week, we came way from the vets to an empty home not knowing if they would be with us the following weekend.
We knew by Tuesday night that George was ok, so don't think he had any of them, but poor Tess, had to go back to the vets as she was being sick after she had her perscribed tablet. She got better each day and by the Friday back to 100% play fighting with George. We just hope she has no long term damage.
So the morall of this story, please don't leave tablets in your pockets when you have dogs around. 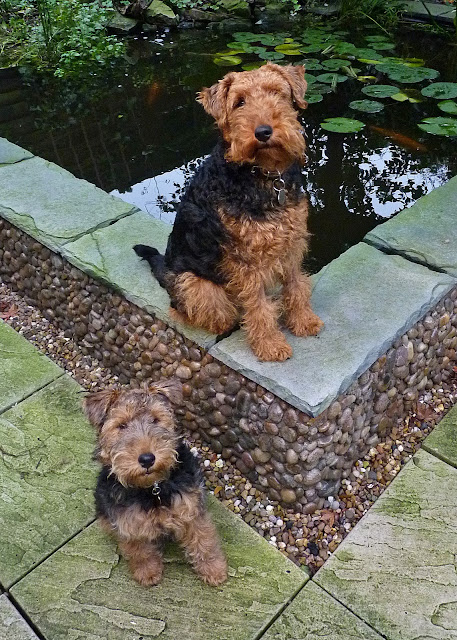 Its over a week ago and we are still ok, the signs are good


George is showing me some brotherly love on Sunday
**********
Breaking News 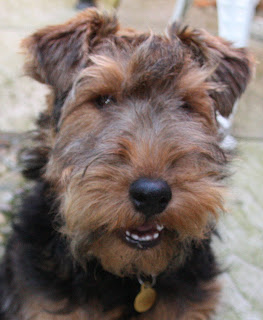 I'm a week late bringing you this news!!! so not much time left
Its George's 2nd Birthday on 27th November

Come back Thursday,
for full details of how you can join in, if you want.

Its a wrap for this weeks Tess 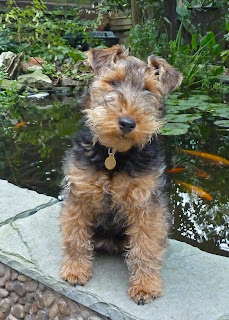 Oh Tess, thank goodness you are alright.Poor George too, best to be safe than sorry.
Oh my how many kisses is George giving you. That's love.

Oh how pleased must George be, that you are safe and well and back home Tess. He is so lucky to have such a sweet face to lick. I have to make do with Gail's hands.
Toodle pip!
Bertie.

What a nightmare! Big hugs to mum and dad who must have been scared witless.
Glad that you are all fine now xx

Oh My Gawd, that was scary for sure. Thank goodness everything is ok. Tess no more lollies unless your mum or dad give them to you ok? Tell your mum not to worry about the grey hairs, that's what hair colour is for hehehe.

The photo of you two sitting near the pond is adorable. Mum went Squeeee again. Sigh. She is so loud. We will come back and help celebrate your birthday for sure George. No worries, and love, Stella and Rory

OMD..that was so scarey for you all! We are so pleased that you are both doing well!
Tess no more eating things unless your Mom gives you them.

Our hoomans are paranoid about tablets, lotions and potion's here..as some here will eat anything!

p.s. George tell your Mom you need some Yorkie Pud!

Oh no, i don't want to think of what might heve happened! Please, do not do that again!

How frightening!!!! We hope there are no after problems. No wonder you didn't feel like blogging.

We are all so happy that you have made such a good recovery. Your Mum was so worried when she was talking to our Mum in the week. We have had our 16 paws crossed very tightly for you.

Now Tess don't you go picking up any more sweeties, let Mummy give them to you cos she knows which ones are best for you.

So so glad everything turned out ok! What a scare!!

Oh goodness, mum and I are SO happy that you two are OK, and mum says she can totally relate to the grey hair comment. She puts stuff in hers to make it look dark brown again....

On the video me thinks George thought you were a liver flavoured lolly-pop!! BOL!

I know when your B'day is George, and I look forward to your Thursday post!!

So glad you're both OK! Sometimes my Mum says that she can't understand when they say people with dogs are more relaxed stress free people than those without :-) Take care Tess and no more tablet eating - it's bad enough when we HAVE to have them! Love to you and George and your peeps - Magic xx

I am running late for work, but I had to come by to read this.....OMG, all I can say is that we are SO HAPPY THAT YOU ARE ALL OK!

WE will be back later this evening....Anita

That had to be a scary few days! I am so glad George and Tess are OK!

I'm so glad that everyone is okay.

Aw, we are sorry that Tess got sick from the meds that her human accidentally dropped:( Our peopel do that too, once Winniechurchill ate a whole bunch, but she er, let's not go there, right away so she was okay.

Anyway, we are sorry for the past week but glad you are now okay:)

My little Ernie got to CHEWS the WINNER fur my DUCK TAPE thingy... and He Picked YOU!!
Congratulations BUDDY.

Hey George & Tess!
Wow, I so glad to hear you are both okay now! What a scare. I guess not everything on the floor is a treat. Whew. Great pix of both of you...and that video is totally cute. I'll be back for those barkday wishes!! BOL
Grr and Woof,
Sarge, COP

Mee is on a bloggy breaky too but mee wants to say how hap-pee mee is dat you guys are OK. Good ting Mom saw dat empty pack! Now...no more touchin' tings like dat!

Phew! I'm SO relieved it's ended well. You know that we were very concerned for you both. I'm sure Mom and Dad have been through the mill too. Don't get eating anymore found sweeties though...
Lots of love and BIG {{HUGS}} to you both.
Auntie Rose xx xx

Tsk, tsk, Tess. No wonder George has his tongue out--he's giving you a "raspberry" for making him spend the night at the veterinary clinic. You youngsters! Thank goodness you're all right.
p.s. Miro and I met a cute Welshie at the theatre Sunday night! Photo is on my blog.

What a skhare fur all -

I khan't help it if my snooter finds 'em!

Tess, Tess, Tess... No more people-pills, OK?? How scary for your humans!! And shame on your vet for telling them that you could ave renal failure... a little extreme, we think... We'll be back for Georges birthday!!

Oh my - that must have been a scary time. I'm so glad you are both okay!
Stewey

Wow! That's the kind of excitement that nobody wants! So glad you are both okay. Looks like you'll be keeping everybody in your house on their toes a little more, eh, Tess?! Looking forward to George's birthday celebration, that is if he isn't too peeved about the poodle cut that Tess caused :)

Oh, that must have been so scary! We were scared, and we were just reading it! Tess, we sure are glad to hear you are doing better. We are sending rumbly purrs and prayers that there are no long-lasting effects.

What a scary experience! I am glad you both seem to be doing well. good thing moms came home and caught you in the act Tess!

OMG! How scary for you! Thank doG you're both okay!
awwwwwwwwwww - we just love that video!

I could have told you she was going to be trouble, George!

To Tess: But we love you Tess, and are so glad that it all turned out okay. Always know what you're taking before diving in like that, Tess!

I had to come back because this morning, I was running late!

SOOOOOOOOOO CUTE YOU ARE! Anita and BALZAC!

Thank goodness you are both OK. So sorry you had to go through such a scare. We are so glad they are both home safe and sound. :)

Goodness! What a roller coaster ride you have all been on! SOOOOOO VERY HAPPY that Tess and George are okey dokey! Whew!

Oh my, what a scarey time. Glad to know you're both OK. xx

Oh, how scary! So sorry you had to endure that uncertainty, but so glad they seem to be in the clear. They are so adorable. :)

What a close shave. I remember the worry when we feared horatio had eaten a magic mushroom. Mischievous pups have a lot to answer for!

Hi George, Hi Tess. Thanks for getting in touch with me and at such a dramatic time! Glad that everything is now OK. I've created my own worrying moments what with jellyfish, being kicked by a horse, running into a slate bird table etc. But tablets is not a good idea! Hope my secretary sorts out his primitive blogging skills. Love Archie X

OH HOW HAPPY I AM TO SEE YOU COME TO VISIT US, Georgie and Tessy! teeheee...you two...

Oh my friends, give your mum and dad big hugs from their friends across the pond; may all of you be in good health and remember that LOVE is the greatest of these.....Godspeed to ALL both human and er....canine! shhhhh....

LOVE YOU ALL! Anita and Balzac

Oh dear, what an ordeal. We had a similar event, when Wyatt ate what looked like a pill that fell out of a relative's purse. Diabetic pills to lower blood sugar. We called the vet right away. We made Wyatt drink hydrogen peroxide, to throw up. Everything was fine, but we were all nervous wrecks!
So glad that Tess and George are okay. Aire-hugs to you all.