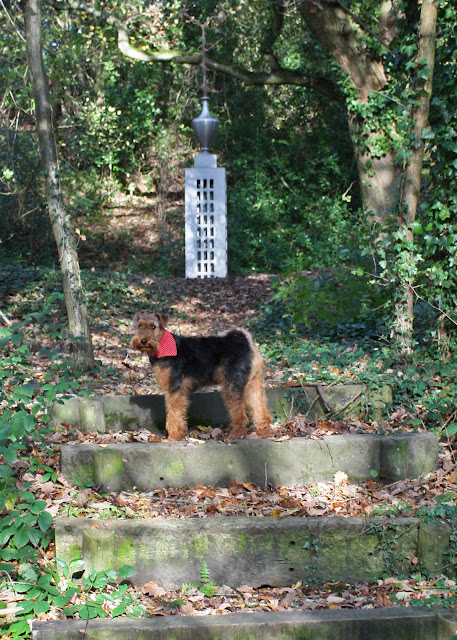 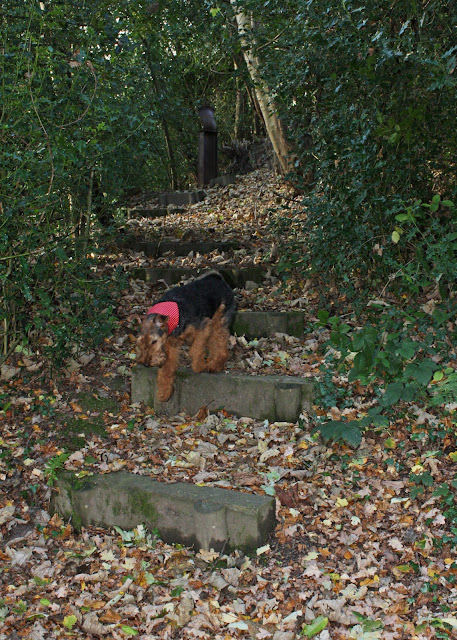 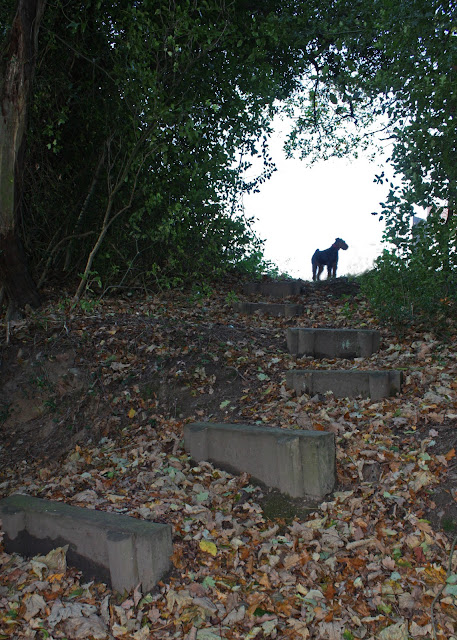 See Yea George xxx
The Birthday Bucket ends at 12 midnight GMT. Sunday
so if you want to be included just leave a comment 108 are in the bucket as it stands now, can you believe that!!!
I will put a post up, as soon as I can with the two winning names.
Next Saturday is The Birthday Steps, keep sending them in if you want to be here with me.
The vote looks like it is going to be the Water Fall, don't waste your vote it could still turn around.
Now some of you asked about me walking on water that mom put on the interview!
Well that's right, I did think I could walk on it, I was only a pup of 10 weeks, it was the garden pond, luckily mom and dad was always outside with me, it just happened it was dad that some how looked the other way for a spit second, that's all it took, my world fell apart!!  I tell yea dad was quick off the mark, I went down about a good foot and a half, you could see where me feet had touched the side! then I felt dads hands grab me, I felt like a rocket coming back up, I'm sure I would have been a goner. So I'm not frightened by it but I do have a great deal of respect for it.
Posted by George The Lad at Saturday, November 20, 2010

George, we love the pictures of you on those steps!! You have great steps where you live!!! Have a wonderful weekend! Lots of love, Holly and mom

George! The Lad! We are BACK! We took a short holiday this past few days ... and you and your Saturday Steps are the first place we came to! You never let us down, George! We could almost hear ya crunching in those leaves!

And you know what? We linked to this post. Ya know why? 'Cause we thought of you today ... climbing some rock steps on our Friday Hike.

Hope you're doin' well. Watch out for big puddles. OK?

Those are the coolest "rebel" steps ever! :)

I'm so excited for your B-Day celebrations! Yay! Can't wait!

George,
We sure like that last picture of you going off into the sunset, it's like a movie poster!

You had to be one scared little puppy, going right down to the bottom like that!


I am glad your Pop saved you so that we could all be George-pals!

Ok, so I figured out why my camera wasn't connecting to my computer and got that fixed. Now I have to take new pictures of my boys on steps because I accidently deleted the ones I had. I'll see if I can rectify that this weekend.

Looking as handsome as ever, George!

I do love that last photo with you in the silhouette

OK, I saw this first picture and thought - hey, maybe I could handle these stairs. But then I saw the second and third picture ...no way I could do it.

That is a very scary story. So glad your dad was right there to grab you.

Now those steps look like the best place to run around!

Bella tried to walk on water when she was a puppy. Sure surprised her!

That second picture of George is great - I would frame that and hang it up!

Love your steps, George. Oh, it's a good thing that Dad saved you from the water, but then that's what Dads are for, too, isn't it?

GEOOOOOOOORRRRRGE... you have 108 entries already???? That is super buddy. It will be a HOOOOOOGE event fur sure!!

Great pho-toes George!! So many fun upcoming things too!!

nice steps, george! i really like the first picture cuz it kinda looks like you are standin' in front of a mini skyscraper (that silver thingie) in the woods. heehee.
thankies for explainin' your walkin' on water story! me and asa and mama were wonderin' that after reading your interview on CWAC. that was kinda scary, and i'm super relieved that your daddy was able to rescue you way fast like, especially since you were just a little pupper! oh, and pretty please woof to your mama that is was so nice to see her in the pics with you, too! ya'll look so cutesies 'n happy together. :)

That looks like an absolutely divine place for a walk! We saw some "steps" in the woods today - it was a pretty steep incline that I really wanted to explore, but I had a friend's 9 year old dog with me and didn't think he could handle it. Maybe next time!

A gorgeous picture of the steps! This place looks so mysterious but beautiful too!

Your birthday bucket and birthday steps are getting more and more exciting now!!!

George, you really are the STAIR MASTER!! I'm just learning, but I think I might one day be nearly as good as you are!! As for your birthday, I am so excited!! And what is even better is that it will JUST BE US DAWGS!! NO CATS ALLOWED!! hahahaha! Fine by me. Besides, I heard the cats talking about a cat-only birthday party they are going to. These days its all pawty, pawty, pawty!!! Yay!!! Woofs, Ellwod

George mi man, you give me such joy old thing. And mi mum has been so tired from working with the little tykes at the school that she doesn't have any time to play with me. I grrrrrr, I chew, I cry, I whistle, but she just falls asleep. You lucky boy you, you get to go out to play on the steps! Mum want's to draw me, but she hasn't had a moment to go down to her drawing table. Oh these humans, what is it with them? Balzac

Oh Jan dearest, you don't know how much you and George mean to us. Laughter and sweetness abound here and I thank you for always making my day so bright!

HAVE A GREAT WEEKEND! Anita

We just love that last shot of you, George!

Love the last picture, George! We'll be sending in our step photos to you this week!

George I hope you don't think I'm too forward...butt you have a very handsome set of legs...no wonder you are always on steps and you annnnnddddd you are a sight for sore kitty eyes.
Hugs madi

and congrats on your Coffee with a Canine interview.....I loved it!

Cool! You do have some amazing steps! Those are the kind I like to go up (some others are pretty skery).

Love those photos, the last one is great...so perfectly framed by the trees. Spectacular! We are gonna get out and do out steps picture today!

Hi, George! I got your message and YES, we have the same birthdays!! Whoohoo. Link me up to those steps! That sounds like you are going to have a fun birthday--I wish I could come with you, but that's a big pond to swim across....
Oh, and we read your interview on Coffee with a Canine. Ours will be be there in a few weeks!!

You really luvs your steps! Happy Weekend my
furiend!

You are so lucky to be able to find so many steps to climb. Our humans need to take us better places so we can find some better steps than our back deck.

George you are so handsome on those steps.
What gorgeous photos.

I tried to walk on water once too, but it did not work
love
tweedles

What great photos - we liked the last one best! Sounds like a great contest - we have to check it out! Lots of licks
Sally and Paddy

GEORGE MI MAN! Oh, do I know how you canines can read us peeps! Balzac knows my every step and yes dearest furry one, to have BOTH art and science pinned down to a science is a blessing. But intelligence is often overlooked in the PEEP world as well as in the CANINE WORLD! Those peeps who say such rubbish as, "OH, it's just a dumb animal..." OFF WITH THEIR HEADS!!! teeeheee....but ya know what I mean son? YOU CREATURES HAVE AN INTELLIGENCE BEYOND OUR UNDERSTANDING, and yet you furry ones understand us.....hmmmmm, there is something interesting here! Balzac is gonna send you a drawing of him on the steps. I will send that shortly as I need to scan it. Enjoy my friends! Anita.....Balzac is snoring upstairs!

George you have the most beautiful places to walk. And it seems all of them have steps! BOL!

Waggin at ya Birthday buddy :)
Roo

Beautiful photos, George, as always. And some cool steps, too!

Hi George, I just found you and what a gorgeous lad you are!

Oh you have GREAT step pictures! We're going to take a little tour of your past posts and find out about your walking on water!
Hugs xoxoxo
Sammie and Avalon
PS: think we hit button twice on your birthday bucket post - so sorry!

Outstanding silhouette, You look like a film star up there George.

George, I love that last photo especially. You have such a fine profile.
Toodle pip!
Bertie.