Mmmm not that local, still have to go in the car to get to it 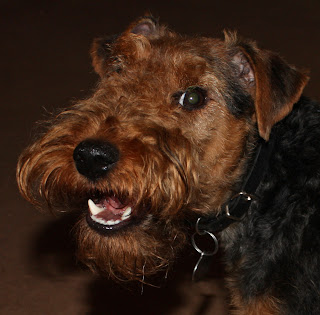 It's this place called Haughmond Hill 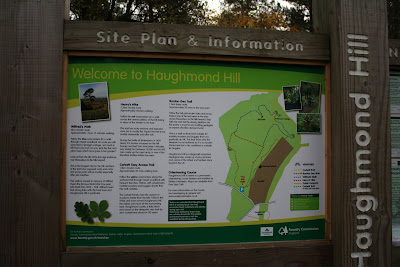 Looks a nice place, plenty of different walks and things to see, we get out the car, this is the first thing I see 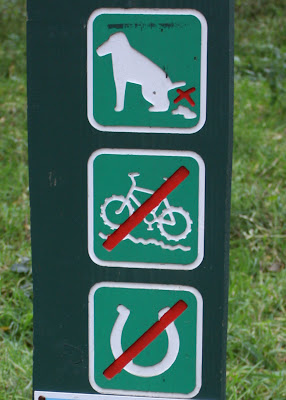 They're having a laugh, 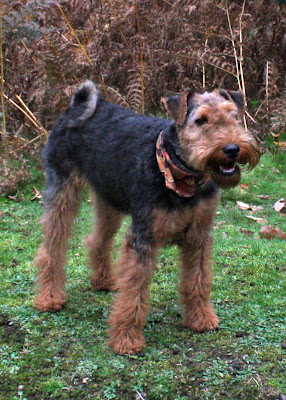 All those woods and﻿ us dogs have to hold on to it!!
Mom pulls me over to the sign, to check if it right, this was at the bottom of it, I suppose so us dogs can read it! 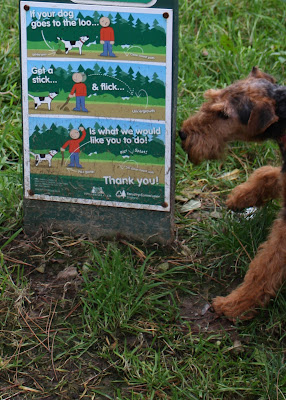 If your dog goes to the loo.....
get a stick &  flick.....
Is what we would like you to do!
Thank You!
That's a new one to me!! but mom told me that peeps in some areas are taking their dogs out into the country, using poo bags and instead of carrying them till they find a bin, or get back to the car, they have been tying them on trees to pick them up on the way back, well do they pick them up, not all the time!! so you end up with a poo bag tree, yuk,
Ok that enough, lets get onto the walk. 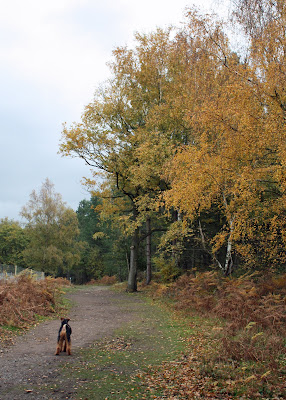 We went the route that took us pass the quarry which had a viewpoint looking into it, I tell yea, this is a very big hole!! 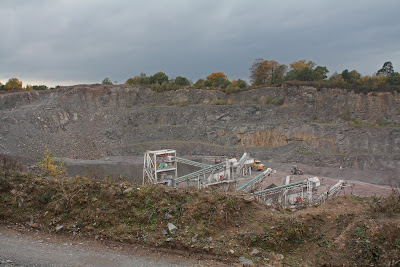 The stone goes to make roads 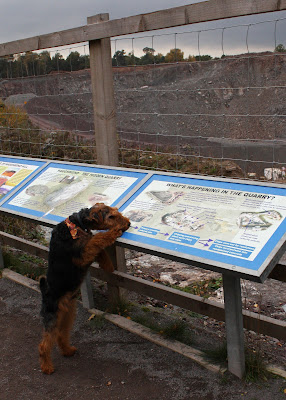 Well that's what it said here!
We carried on, and came across these rocks.

With a sign that had some information about them, don't worry if you can't read it we will be coming back again, I'll take more notice of what they say, this was called the Bardon Geo Trail. 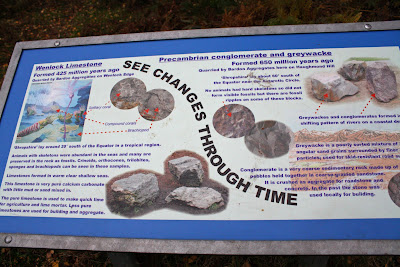 On to one of the viewpoints 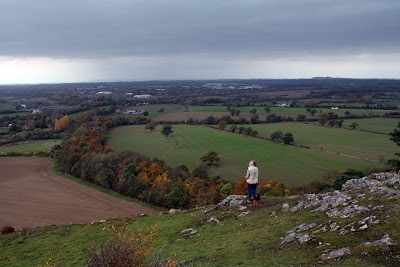 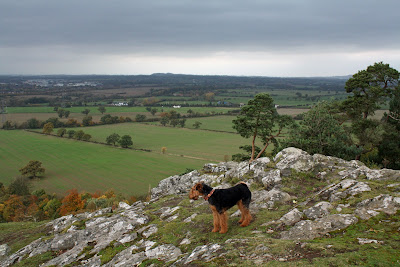 Its at this point, I would just like to say its mom that could have done with a stick ; )
The wind started to pick up, yep you got it, me and my fuzz face. 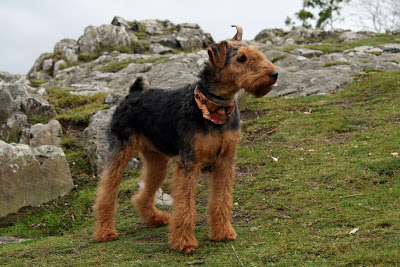 Stick with me (excuse the pun lol!!) it gets better 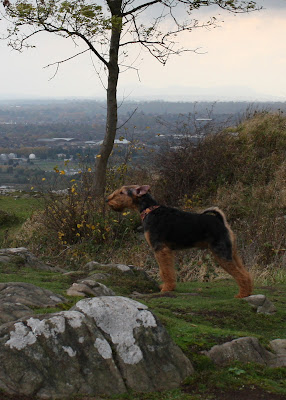 Even the fuzz on me legs is horizontal!! and its at this point that mom looses it, I mean by laughing. See at the time, I had no idea just what was so funny, I tell yea its a dam good job I can laugh at myself and show you the photo she took!! 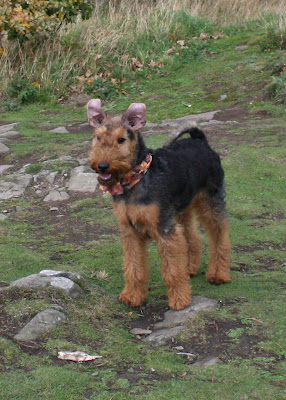 The groomer went to town on my ears not a hair inside!
We'll be going back again, we only went around a very small part of it, hopefully next time it won't be so windy! 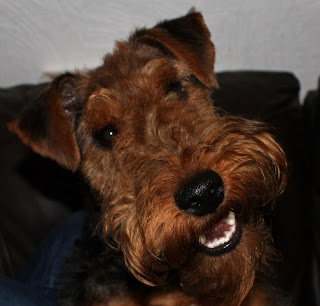 Bwhahahahahahaha...oh my...Sorry George but I am glad you can laugh at yourself cuz I sure did! Now dat was good and I glad your mum got it on camera.
Now, I has nevers seen a poo tree befores. Make sures you get a foto when you see one next time.

Oh GEORGE... BUDDDDDDYYYYYY you have Outdone yourself on this walk. I Love the Poop/stick/flip/bag in the tree thingy. Toooo funny.
Now that pic of you all stretched and lookin out over the land is good enough for a FRAME.
Your ears blowing back it waaayyy funny.
Can't wait for your birfday.

These are again wonderful photos.
I love your ear picture and picture Nr.12.
Lots of love
Mischka

Too too funny. Love those ears. And the horizontal furs. And that flick with a stick!!!

That is such a cool walk! That sign is hysterical! Grab a stick and flick! I'll have to remember that one. :)

Woof! Woof! Pawsome Walkie George. Got some photos for your birthday steps ... will put it together n will send you soon. Lots of Golden Woofs, Sugar

George, that looks like a great place to walk. I would love those rocks!! That sign is too funny and the thought of people hanging poo bags in trees and leaving them...we can imagine that!! We like the Grab a stick and flick one!! Lots of love, Holly and mom

George! Love those ears!! You look like R from Romping and Rolling in the Rockies :-)

I love that sign, never seen one like that before. I take my boys for a walk on a trail near my house. I've never thought to put the poo bag on a tree until I come back round. That would be much nicer than carrying it around!

That picture with your ears up made me smile.

I figured out where to get pictures of steps, now I just need to find someone to help me get the pictures.

Hi George, what a great looking walk. And I like to think that I might be a wee bit responsible for inspiring your apparent interest in geology!
But boy hasn't it been windy this week. Like you, I have hair free ears at the moment and they have been flapping about all over the place!
Toodle pip!
Bertie.

We need to knit you a hat to protect you from that wind! The signs were funny. I guess they have to explain EVERYTHING to some peeps. They need a guide book- "Poops for peeps!"

I love your ears George:)
Looks like you had another great walk!

Use enough flicky sticks and all the tree branches will be broken off, that won't look good either! Go figure.
You have very clean pink ears there. Hope you don't mind that I giggled a bit too! That looked like quite a wind!
~Ryker

What a great walk!

GEORGEEEEEEEE MI LAD! OH, I cannot type as well as mi mum, but I am trying to tell you how much I lOVE YOUR PICTURES SON, especially the one with the ears up the air! AND...mum insists on drawing a picture of me on the steps....she will get to it this week! WHAT A GREAT TRIP YOU TAKE WITH YOUR PEEP FRIENDS DEAR ONE....I so wish I could play with you!

That was impressive wind! If you had wings, you could have flown!!

That looks like a great place to walk. I hope that you are careful when you walk. I had a friend once that went to chase a rabbit while we were walking in the woods. It was icy and he hurt himself really bad; and never got better. He is in heaven now because of it. I miss walking with him, so I will look forward to watching you on your walks.

Getting a stick and flicking it, is a new one to me and I own four dogs!

George, whaaa,ha,ha! Your Mom takes the BEST pictures!
I'm glad I wasn't at the bottom of the viewpoint when she needed the stick though....
yuck :o(
(Are you getting excited about your birthday yet?)
Lots of love Auntie Rose xx

BOL!! That sign about flickin' the poo is funny!!!

Some great pictures of you George - lookin' good :)

Yoo-whooo, it's me again George!
Pop over to my blog please, there's an Award waiting for you :o)
Auntie Rose xx

George, it's always good to have the wind thru your ears huh? Looking good!
Those pictures of the valley below were spectacular!

You look good with the wind blowin' your furs!
We want one of those big rocks for our yard....how much do you think it would cost to ship over to Oregon? :)

I love that ear photo! And that walk looks so fun. I think going to places is so much more fun with a dog to accompany.

Oh, my gosh! I love the no poo symbol. Have never seen that in the US. We are probably too prudish!

Oh George, that is a great shot of your ears - great catch by the flashy beast operator. That place seems very beautiful for a walk, but poo trees, flicking poos with a stick, signs prohibiting pooing - very strange indeed:) BOL

Geowge
Honestly, I think you should be paid fow being the best toow guide and ambassadow fow youw most bootiful countwy.
That looks like anothew gweat walk, and Geowge..I loooove that pictoowe..I have to stop weading youw bloggie, it makes my heawt wace too much
smoochie kisses
ASTA

Oh thank you George for the laugh! This was truly an enjoyable walk.

Looks like a good day! Your ears go just like our Mr. Bojangles! When he gets really excited he flips his ears inside out. Happy belated birthday! xo

Oh, your ears in that last picture, George!! This just made me smile! Thanks!

BOL a poo tree!! Wow that is interesting about getting a stick and flicking the poo when your dog goes to the loo. Mr George we love when you take us on our walks with yall :)

We love the scottie ears! What a great walk, maybe you should take a putter next time.

George another great walk. We think you should arrange a WELTAF walk you would be an excellent guide.

Now George we are having problems with steps. AS you know we live in a very flat area and we are having to trawl through loads of photos from past adventures looking for steps! We will continue to hunt as we don't want to miss out joining in.

Loving the Flying Ears, George!
Methinks you should have had a scarf and flying goggles to go with them!
xx

A poo stick..maybe someone got confused when reading Winnie the pooh!

Love the piccies of your flying ears.

George me lad..you have us troggin all over at the moment to find the right steps photo to send you! lol

Is that the latest ear fashion, George???

It seems you've found another interesting place with poo trees to walk!!!

Happy Wednesday to you George...
first off you live in a very beautiful country
the vistas in your pictures are breathtaking.

Mom had a big lol at the signs. If the two leggers would use their common sense, these signs would not be necessary!!!

Anyway we enjoyed our walk on your shoulder,
Hugs Madi

The "poo solution" sign is a new one on me, as well, and utterly priceless -- love the sound effects and the self-satisfied look on the cartoon fellow: "He shoots, he scores!" Thanks for the laugh.
- - - - - - - -
Jack@PDB
dog beds and more

That sign is brilliant. Thanks for sharing your windy walk with us!

What cute photos at the end! It seems like neat place to walk!

I love that, if your dog goes to the loo! Thanks for the smiles.

oh, woooow, george, you sure went on a super duper awesome sauce hike, too!! i love how you were standin' on your tip toes to read the sign, and your stick-up ears were grrreat!! heeheeheehee!!

I am so jealous of your beautiful country side and the places to walk/hike. Love the photos!

Thanks for sharing these Pawsome pictures from your Pawsome trip!
Ha haaa... I see the wind was playing a trick on your ears. Sooo funny :o)))
That just proves it that you are Handsome either way :o)

That sign is just a HOOT! Very educational hike today! And it's a fine dog who can let others get a laugh at his expense - and laugh along with them. We LOVE the Flying Ears :)

Hi George and Jan,
Great post today. Well blogger only took 20 minutes to load and it is letting me comment (so far). I complain and it tries harder!!! I need to complain more!! That was a good place to walk, a funny place too!! I also can't wait for your birthday!!
Love you George, Bambi & Fern