Saturday Steps a load of old rocks and some History 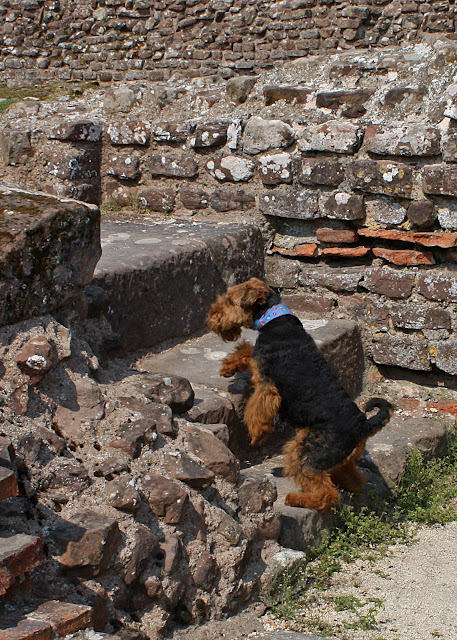 First up, I'd like to thank you for your comments about my last post, as you know it was bursting with colour, well not this one 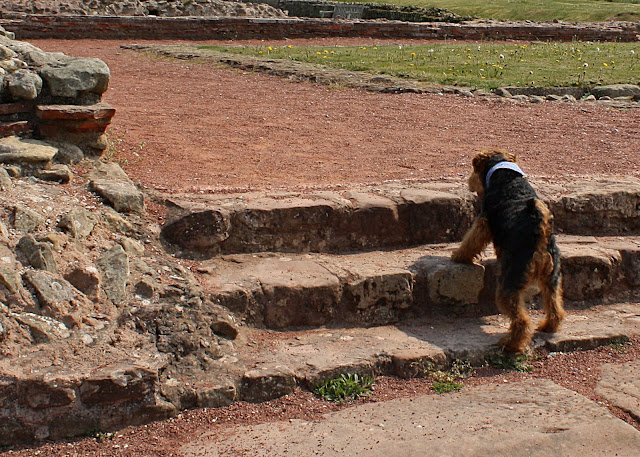 They are very old steps I'm climbing from Roman times. 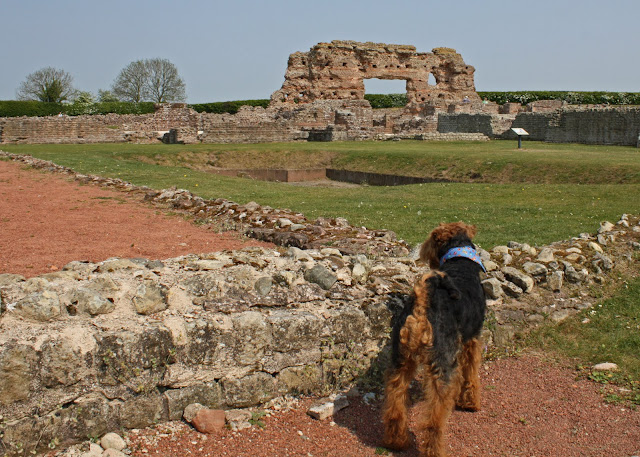 We're at Wroxeter Roman City, on the outskirts of Shrewsbury, Shropshire 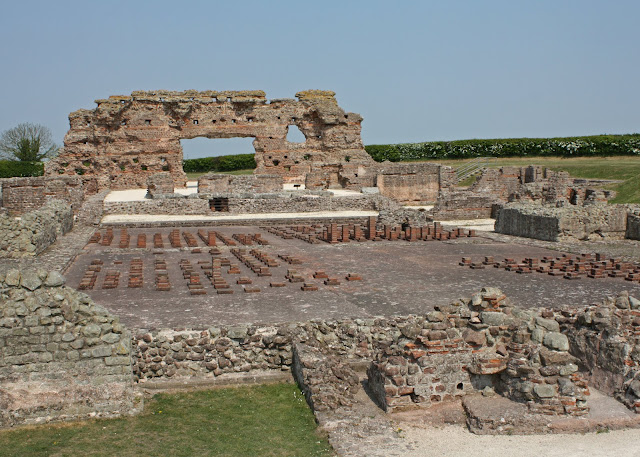 Wroxeter was once the fourth largest town in Roman Britain, the other were London, Colchester and St Albans 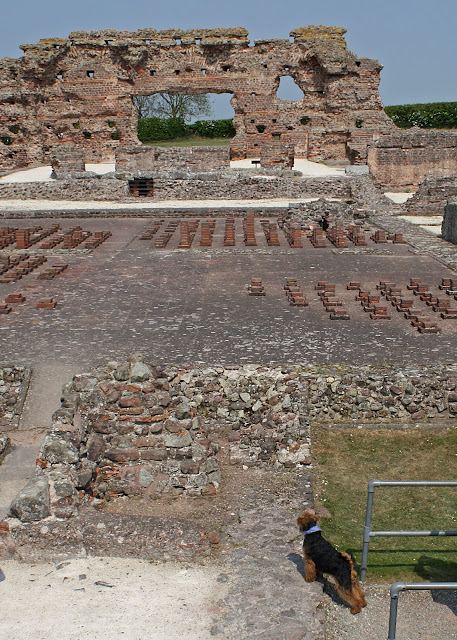 That big wall is whats left of the Basilica, and is one of the largest freestanding pieces of masonry left from Roman Britain 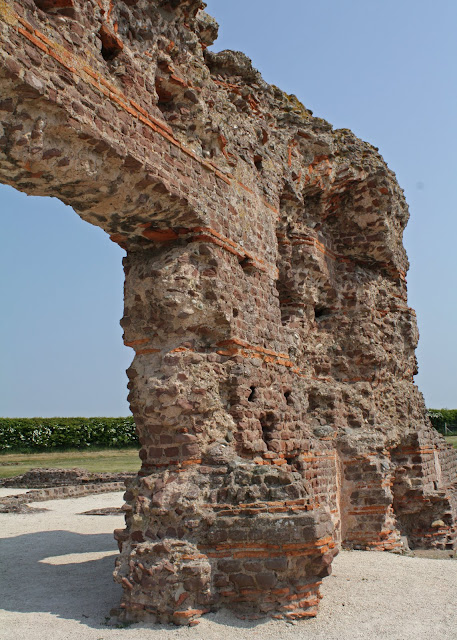 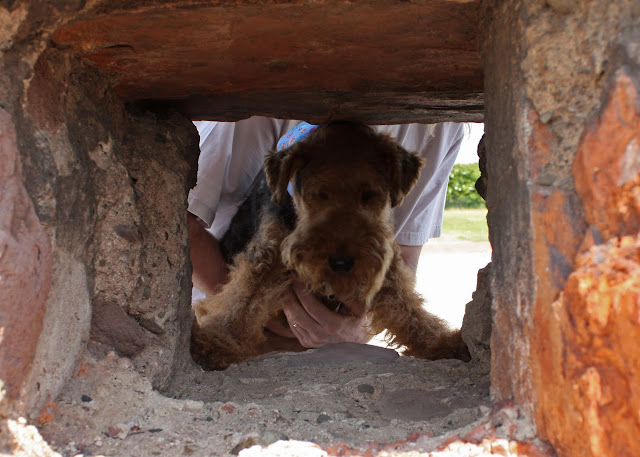 "Dad stop it, I'm got going though there" 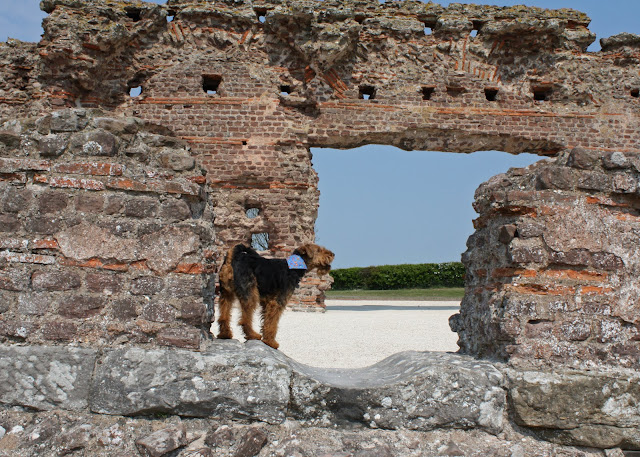 You can see they have put white gravel down. 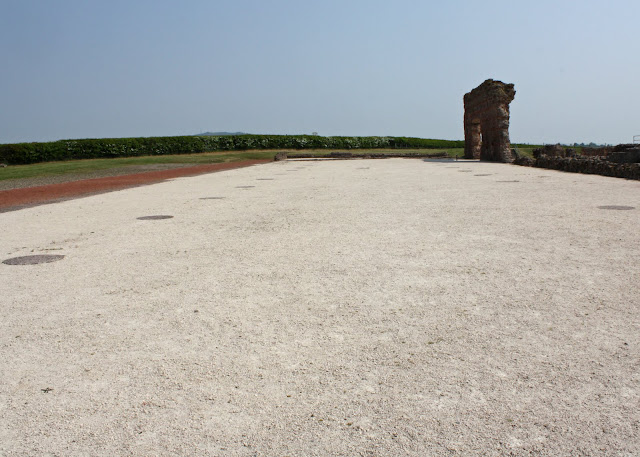 This is where the Basilica was, once a huge hall with massive columns it acted as an entrance to the baths and meeting place. Bathers were allowed to exercise here before entering the baths, Can you see the circles where the columns were. 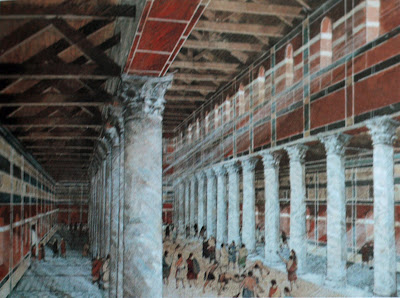 This is a reconstruction drawing by Ivan Lapper of the inside of the basilica taken from the guide book. 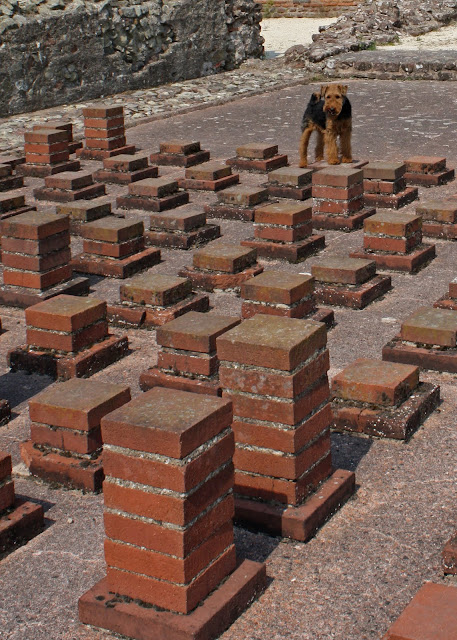 These are the tile pillars which once supported the floor and provided under floor heating. 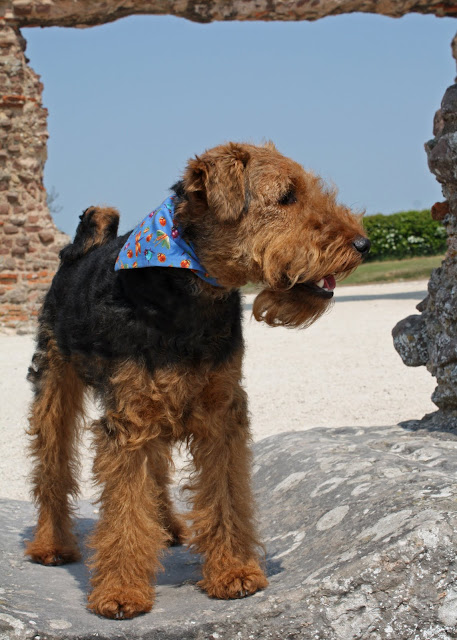 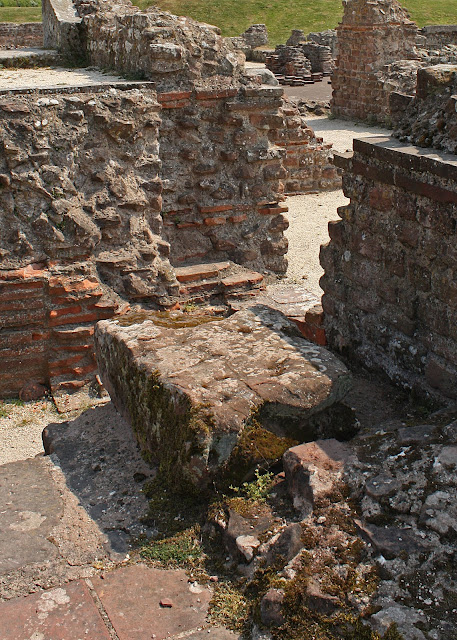 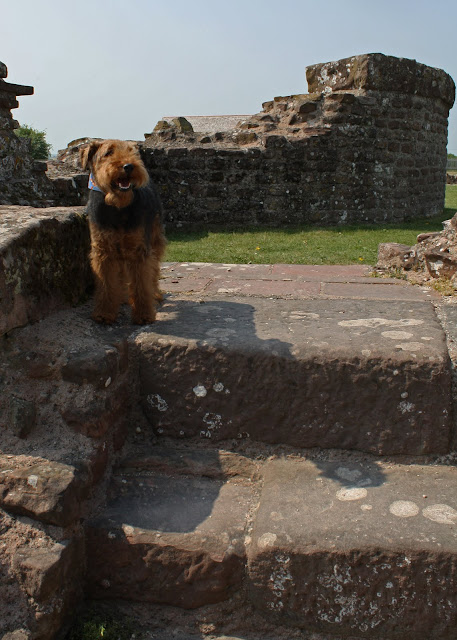 These are the steps down to one of the furnace rooms. 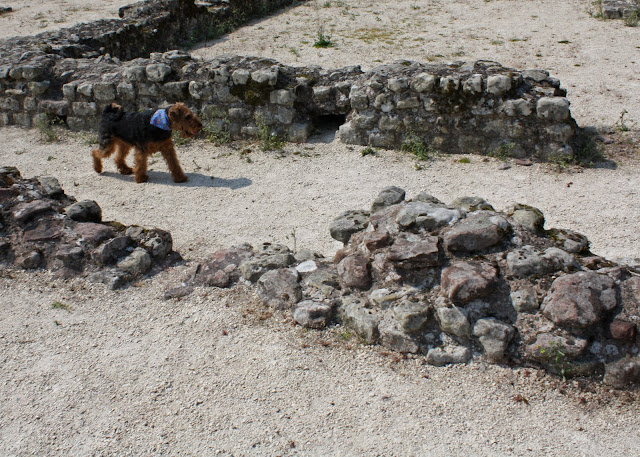 The two rooms above me, according to the guide book might have been bars!! serving food and drink! 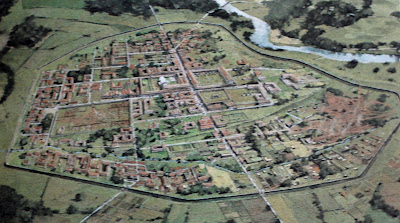 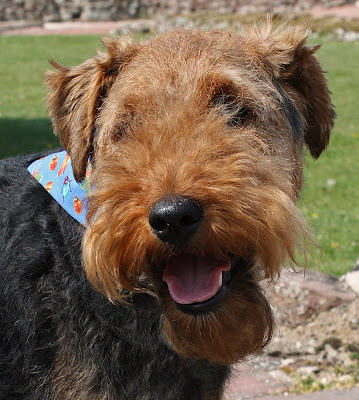 I don't mean me!
Across the road is a recreated Roman town house 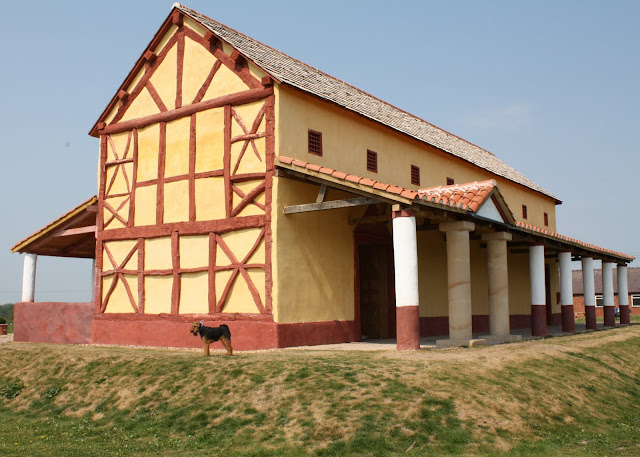 It was a project between English Heritage and Channel 4 T.V. to build a Roman town house, using traditional Roman methods 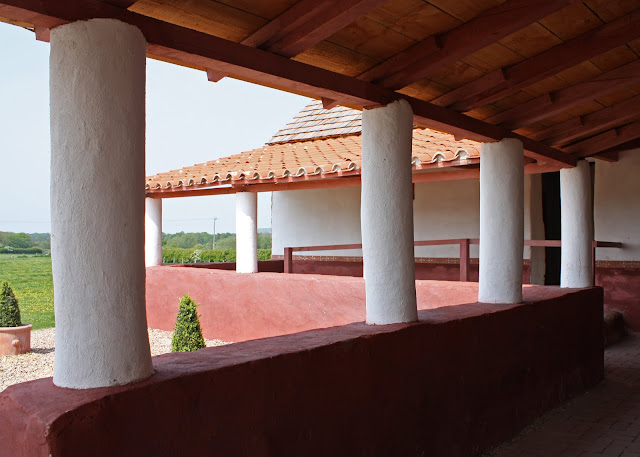 They made a good job of it 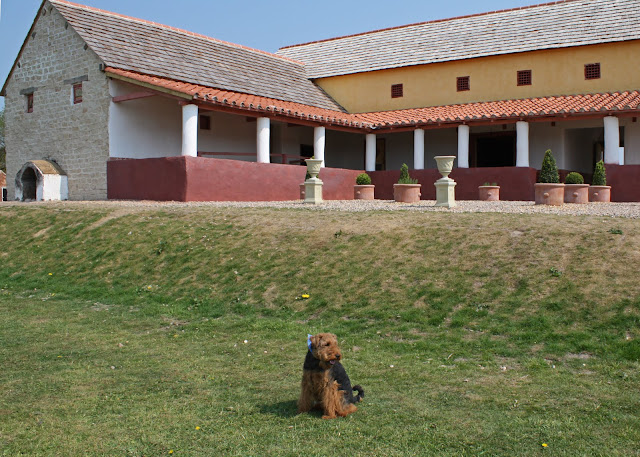 Wouldn't mind living here myself,
All the information was taken from the English Heritage guide book
Its looks from the photos that no one was there, is was very busy, mom always checks on the websites first to see if I am allowed in, it said yes so off we set. We get out of the car the sign going in says guide dogs only.  Me and dad had to wait outside while mom went in to see them, they said it was fine for me to go in, but we did have some funny looks off folks. I was the only dog there
Well infact I was a guide dog,
telling you about it.
The Romans loved their wines and less than a mile away is
Wroxeter Roman Vineyard.
Yes Shropshire has its own vineyard, not that I was allowed in!! 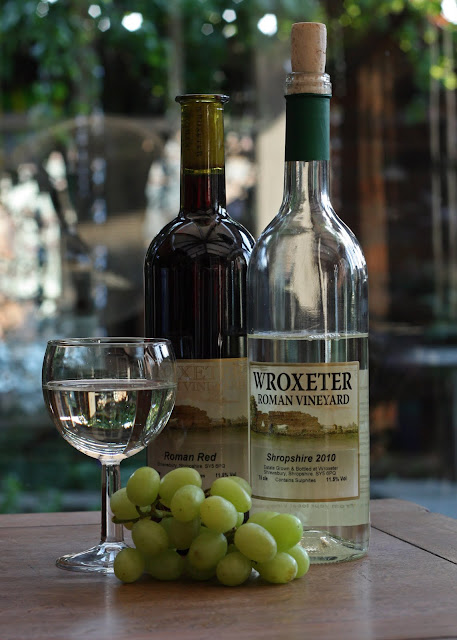 Mom and Dad got some wine, what about ME!! I can't even have the grapes, cheese maybe!! 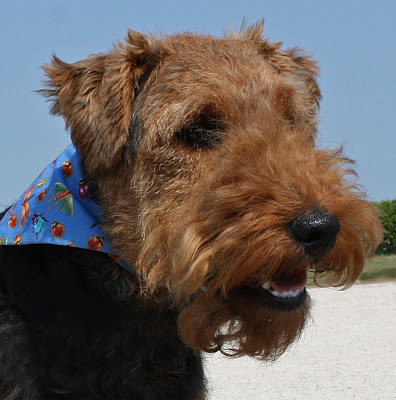 So that's this weeks history out the way.
To my American friends 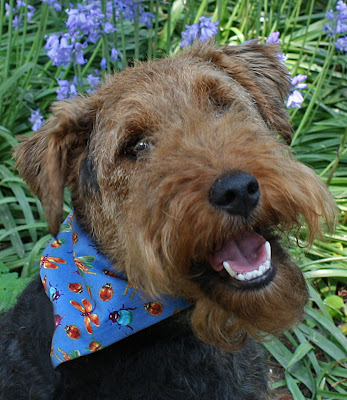 George, you have the most fascinating trips! We love your pictures very much! Lots of love, Holly and mom

George, that was an amazing outing...and some real awesome learning. I so happy you were able to go in and explore ... Yes, cheese is yummy... you look very smart with your spring bandanna with all the spring critters .... your pal Dolce!!

Wow...How did it feel walking on a piece of history. You walked where others walked centuries ago. And yes...you are our Guide Dog!

Mom says thanks for the Mother's Day wishes.

Hey George!
Wow, you always take us with you to the most pawesome places! I love this territory. Fascinating place and I bet you had a blast sniffing around there. Thanks for letting us see with you.
Grr and Woof,
Sarge, COP

George this may not be a blaze of color like last week.. butt it is stunning just the same. Seeing how people lived so long ago.. and the skill of the builders... just amazing. THANK YOU.

PeeS.. I'll give your Mother's Day message to my mom.

Thanks once again for the fabulous tour, George! Absolutely fascinating!

Thanks for the great historical tour, George. It must be fun to have so many great places to visit. Too bad you couldn't have some wine - hope you did get some cheese.

Have a great weekend. Mom says thanks for the wishes.

George you are a fantastic guide dog.....maybe if you get a badge or something, they'll let you in more places.

SHE loves history, so SHE enjoys your forays into the past. 200 years is old here, so Roman times.....just amazing.

What is a Roman anyway?

Very cool, George! I think you were very wise not to let your dad push you into that hole! Good thinking!!

Enjoy your weekend! Thanks for the Mother's Day wishes!

George, that was fascinating. Blog Mom especially appreciates it. She loves ancient things (well, she is kind of ancient herself) plus England is one of the few places she'd really like to see, only it looks like she's put all her travel funds into the care and feeding of Shar Pei so it might not happen. These posts of yours are the next best thing to being there, plus you're in most of the photos so maybe it's even better than being there. Anyway, we love this stuff.

George - you're the best guide dog.. I hope they awarded you your Blue Badge!

Wow George, that was a fascinating post. What a splendid place to visit. Reading this blog might actually teach Gail some history (you will probably have worked out by now that this is not her strong suit). And you are looking particularly fine in the photos with your attractive bandana toning nicely with the blue skies.
(It is raining again now here in Alex Salmond's Kingdom).
Toodle pip!
Bertie.

Thanks for that informative tour and post. You go to the best places!! It's mother's day her tomorrow in Australia too. Must remember to pick some flowers for mum! Tail Wuggles, Rubie.

Hi George, that brings back some memories...I went there on a school trip many (many) years ago. I seem to remember they were still digging parts of the site - I could be wrong as we visited a few old monuments. Hope Dad was suitably dressed as a Centurian ;o) fancy him trying to shove you through that hole!
Sorry you missed out on the vineyard - I bet Mom had a treat or two hidden about her person for you though.
By the way, you can join me on a walk down the lane anytime.
Lots of love
Auntie Rose xx

Another fabulous trip for you, George! So much history!

Oh George son, you are THE OFFICIAL GUIDE DOG OF BRITAIN!!!! You must put your "THE CHEEK OF IT" stamp of approval on all spots visited and make a little book...how fun that would be!!!! YOU ARE STUNNING AS ALWAYS and mum and dad polished off all that wine, grapes and cheese...sorry son, we dogs don't get much, not even the scraps. Us American dogs are getting too fat so they have us on these silly diets....oh BOTHER!!!! Mum says THANK YOU, MERCI BEAUCOUP for the mum's day wishes...although she is not a mum to humans.....have a fab day my friends, Balzac and Anita!

Before I forget, love the bug scarf George!

Wild place you went to. Good thing you don't eat rocks! ;) Very cool that they let doggies in :)

Wow! That is pretty neat - I love the reconstructed house!

At the first glance, I thought I had been there but then realised that I haven't been there at all. The place and the buildings look gorgeous.
Thanks for giving us a bit of history class, it's really interesting.
I love those steps too, fabulous!

Thank you for the tour George it was very interesting. You of course are as photogenic as always.
Have a wonderful day!

I just love touring with you George. Thanks for being such a good tour guide!

Thanks so much George, you always provide us with such interesting information. Mom and I just love all the fotos and details!

Have a Great Weekend!

George,
Thank you for the tour. We are glad that you got to get out of the car. The pictures just wouldn't be the same without you in them!

P.S. Stanzie likes her picture on your sidebar.
It makes her tail wag!

Thank you for the history lesson and wonderful photos, George. My humans took me camping in Shropshire once, but did not make to the Roman ruins. Maybe you're post will inspire them to organise a trip there so we can check those rocks out for ourselves. My human sister spent all last term studying the Romans, so I'm sure she'll find your pictures and information very interesting and useful.

See you,
George (the Whippet)

wow that looks a great place to explore, my Dad loves anything to do with history and old things ( thats why he is with my Mum)
We are new to blogging and loved the look of your so are following..
pop along to ours too as we will be seen doing exciting things toooooo
http://canineramblings.blogspot.com/

You are very lucky.
In fact, you always go into beautiful and interesting places.
And we are pleased that you share with us
these wonders.
Thanks.
Woof woof,

BowWowZer George! You go to some of the most fascinating places. Nothing as old or interesting here. Of course, you always are the bestest tour guide too! Good week ahead.
Smooches from pooches,
BabyRD & Hootie

Hi George! What a great tour you gave us! You are so lucky to be allowed in, we live near to the Roman Baths in Bath and are NOT allowed in! Our human thinks the wine looks great, glad you had such a fab time out. Dex & Lou x

OH yea, I wouldn't mind living over there too! Just look at all that land!!! So cool!

Oh, George - what a fabulous tour! Dad would really enjoy this - he loves architecture, and, um, wine :) Thanks for the history lesson - you make learning fun!

It's just amazing that anything is still standing from the Third Century! Thank you for sharing, George!

Hey George!!
Once again you have outdone yourself with gorgeous pictures!! We love the one of you looking through the hole!!
If you ever tire of being a pampered and loved Pooch and decide to work for a living...you would be an excellent tour guide.
Hugs Madi

OMDogness! This is a Pawsome post.
Historical indeed...
You are as Handsome as ever my friend :o)

Wow... those are some amazing and gorgeous ruins!

Wow! thanks for sharing with us these lovely historical sites. You look like great with all this "rock climbing" of your ^^
Yes i agree no going through the hole though...you are wise to tell dad about it.

Please your mommy all my cuddles, licks and loving belated whispers of "Happy Mommy's Day" ;)

We've been playing ketcup wits our furiends and got two great walkies in one day!!!!!!!!